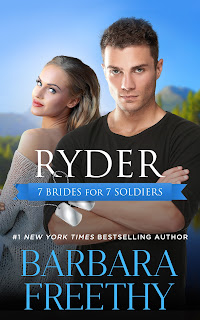 Believe it or not, Barbara Freethy is a new-to-me author. Okay, put the pitchforks down. At least I've finally discovered her, and now I get why she has such as strong a reader following as she does. 7 Brides for 7 Soldiers is a multi-authored collection of--wait for it--seven books featuring a band of soldiers all belonging to the town of Eagle's Point, Washington. I'm not sure if this is a spin-off of another seven-author series--7 Brides for 7 Brothers, which I'm guessing doesn't necessarily follow the story line of the classic film musical from the 1950s--but I didn't encounter anything that made me feel as if I was clueless, so I'm pretty sure this new one can be read on its own.

Ryder is the story of thirty-two-year-old former navy pilot Ryder Westbrook, whose near-death experience along with his flight crew leads him to take stock of his life as he knows it. Retirement from active duty finds him back in his hometown of Eagle's Point and taking over the airport seems like a step in the right direction. Ryder believes extending the airport's runway will lead to more tourist revenue, but the land he needs belongs to the Tuckers, a family that just happens to be the sworn enemy of the Westbrooks. He knows he's going to meet resistance, but maybe if he had an ally on his side, things may work out his way, and he's got his eyes set on Bailey Tucker to help.

When Bailey Tucker left her family and hometown at age twenty, she did so without looking back, thinking Eagle's Point was too confining a location for her big city dreams. Eight years and one very public scandal later, the would-be chef is back, needing a fresh start that'll make her forget all about the betrayal and humiliation that she left behind in Manhattan. When Ryder Westbrook suggests they work together in order for him to get the land for the extended runway--in return, Bailey gets to rent a Westbrook-owned location for a restaurant--she thought it an impossibility. Who'd have thought they'd become not just allies in the Westbrook-Tucker war but in love as well?

This was an easygoing, fun read, one that had a modern-day Romeo-and-Juliet feel to it, what with the war between Ryder's and Bailey's families? I thought the reason behind the whole feud was kinda petty, especially since it clearly stemmed from nothing more than envy and jealousy, two things that, in hindsight, shouldn't even have been issues. But then one of my favorite things about this book had to do with the two families and they dynamics involved, given how Ryder and Bailey struggled to find their footing in an environment that they should have been comfortable in their entire lives. The inter-family drama was what provided majority of the angst here.

I liked how the romance between Ryder and Bailey played out. She was wary of him because of his last name and he was simply this good guy who couldn't care less about the feud that should have been over and done with already. It looked to me like there was an honest-to-goodness friendship that indeed blossomed between them right before all the romance and intimacy stepped in, both of which were on the "clean" side. Overall, Ryder did a good job introducing readers to the town of Eagle's Point and the individuals and families that those who plan on continuing on with the 7 Brides for 7 Soldiers series will be coming across time and again. This one gets four stars. ♥