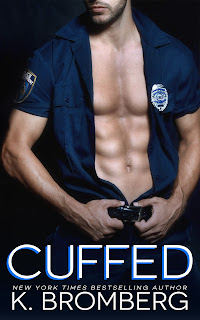 This hurt doesn't take away my pain, only being strong will.

I am in control of me.

I will survive despite it.

I am loved regardless of it.

I only discovered K. Bromberg's writing this year (sad, I know), and yet in the five times I've read her work, she's never left me disappointed. As a matter of fact, she's managed to surprise me given how she went from a lighthearted second chance, celebrity romance in Sweet Cheeks,  which she followed up with an enemies-to-lovers novella in Sweet Rivalry, to an angsty sports romance duet with The Player and The Catch. With her brand new Everyday Heroes series, she's introducing fans and readers to a place called Sunnyville and to three brothers--Grant, Grayson, and Grady Malone--each one an emergency first responder, every single one serving their purpose to the fullest while finding love with three strong women who push them to be even better than they already are.

First off in the series is Grant, who happens to be a police officer, and his story is told alongside that of his childhood best friend, Emerson Reeves. He's loved her since they were six, but when they were both eight years old, Grant made a decision that sealed his Emmy's fate--a decision that not only took her away from Sunnyville and his life but made her hate him. Two decades pass before they see each other again. There's nothing left of the little girl who laid claim over Grant's heart. She insists on being called Emerson and informs Grant that she refuses to speak of the past, choosing to focus on the now and the future. But maybe if he digs deep enough, if he pushes and prods at her carefully constructed barriers, he can show Emerson that there's no reason for her to stay hidden.

It isn't only Emerson that's changed. The boy she trusted above everyone else has grown up, and everything about Grant Malone pulls her in. Unfortunately, this is something she can't allow. She's spent twenty years teaching herself to remain detached, limiting those who get close enough to very few, only showing parts of herself that she chooses to expose. Grant represents her past, and it's a past she has no intention of revisiting. But maybe giving in to temptation just once will be enough for both of them. Maybe it will make him respect her need for emotional distance once they've both satisfied their physical wants. Because being with Grant--being back in Sunnyville--is opening up parts of her that she forcibly closed and kept locked, and opening fully may break her...or set her free.

The heart and heat that we've come to expect from Bromberg is unquestionably within the pages of this latest release of hers. However, this felt different, almost as if the author unknowingly raised the bar by delving deeper than I think she's ever done in her past books. I don't want to say what it is that Grant did when they were eight that irrevocably changed Emerson's life, but suffice it to say that it's part and parcel of what makes AND breaks her. While Grant is a far more simple character to get to know--he's someone who loves and commits, whether it be to his family or to his work or to his Emmy--Emerson is complex, those layers made complicated by her past, and when revealed, it's one that makes it impossible not to empathize with the girl she was and the woman she now is.

I had a suspicion what it was that broke Grant and Emerson's friendship twenty years prior to them seeing each other again, and it was a suspicion that was proven right. This book chronicled the journey they embarked upon to forge a newer, more mature kind of relationship, with them re-earning each other's trust. The love was always there, even when Emerson thought differently, and obviously, there were many obstacles that they had to overcome. There was so much more to this book than I was expecting, and this being a K. Bromberg novel, I was already expecting quite a bit to begin with. Cuffed easily becomes one of my favorite reads of this year, and I'm highly recommending you read this five-plus-starred novel ASAP. The next two in the series have huge shoes to fill. ♥