Review: Kidnapped by the Pirate by Keira Andrews 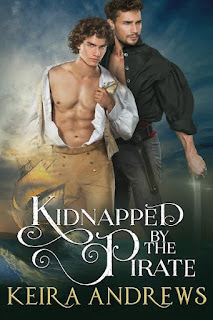 Hawk reached up to cup his cheek, needing to see his eyes again, swallowing his own gasp when Plum looked down at him with pure pleasure and reckless abandon, fearless as he took what he wanted.

Plum was supposed to be the prisoner, yet Hawk was ensnared, powerless to deny him anything, a fishing boat caught in a frigate's churning wake, swept up and only able to hold on.

After reading her latest standalone release, I took a few minutes to ponder what it is about Keira Andrews's writing--which I didn't discover till late last year--that I find so damn irresistible. She's easily become a go-to author for me, what with experience having clued me in on two things: that she's more than adept at creating stories worth reading and that I've missed out on any and all of her releases that I have yet to peruse. But while working my way through her previous stuff is on my mile-long to-do list, what was on my immediate one has been enthusiastically ticked off--reading Kidnapped by the Pirate, a standalone set on the high seas in the 18th century.

This new novel was nothing like any of my previous Andrews-penned reads (Reading the Signs, Arctic Fire, The Next Competitor, and Road to the Sun), and that's just one of the things I love about her books. Here we have eighteen-year-old Nathaniel Bainbridge, the only male heir to the very man that forced one man to switch from being a privateer to becoming a pirate. When the forty-one-year-old legendary Sea Hawk learns that the young man on the ship he and his men are about to plunder is the son of his sworn enemy, he kidnaps Nathaniel. All Hawk expects is a hefty ransom to be paid; what he doesn't expect is to be beguiled by his "Plum" prize. Nathaniel may have been Hawk's hostage, but once the tables have turned, the seasoned pirate may find his heart held captive by his Plum.

I adored this book! It didn't feel overly romanticized, as stories set in this time period and with this backdrop are wont to end up; instead, Nathaniel and Hawk (whose real name I'm itching to add to this review because I like main characters with full names in the books I read, but I'm going to be good) have a different kind of "courtship" that still has hints of their own brand of romance to it. I loved how the main characters developed, going from Plum and Hawk to Nathaniel and M_____ as they earned each other's trust and respect before finally evolving into love. There's even a bit of suspense here, what with wondering what future awaits two seemingly different men. Keira Andrews doesn't try to make Kidnapped by the Pirate an overly convoluted tale of woe. What she's given us is a love story, one with swashbuckling moments as well as simpler and yet more introspective ones. Five-plus stars. ♥

Purchase Kidnapped by the Pirate on Amazon.