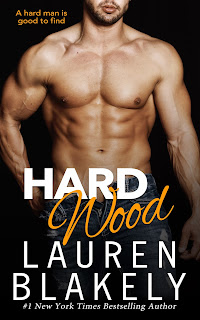 
“Look, I’m going to be blunt. If I told you I had a hiking cat who rides shotgun in a backpack and can purr like he’s a jazz superstar, you’d have had no choice but to fall in love with me.”

Say it isn't so, Lauren Blakely! I can't believe the Big Rock series (formerly known as the All-Male POV Revue and the Men of Rom Com series) is wrapping up with Hard Wood. Whiiiiine! Siiiiigh. But all good things—even the deliciously fictional kind—come to an, gulp, end. Of course, if it does have to end, then it doesn't get any better than the story of thirty-three-year-old Patrick Milligan and twenty-seven-year-old Mia Summers. Patrick is older brother to Evie from the Stud Finder novella and Mia is the younger sister of Max from Joy Ride and Chase from Full Package. The connection between them was hinted at in the aforementioned novella, which was Blakely's previous release, and it's one that's light and teasing with a dash of yummy heat. These two were utterly adorable!

Patrick has a thing for his best friend's sister, but the obstacle before him doesn't have anything to do with whether or not he would get Max's blessing. Nope, it's the fact that Mia lives all the way in San Francisco while Patrick considers New York home. They both run their own successful businesses, so it's not as if they can simply pick and head on to the other side of the country whenever the mood strikes. However, with Mia in New York for a few days, the fun and flirty friendship could easily traipse into new and far more intimate and romantic territory. But how well can a long distance relationship really work, especially since Mia is a self-confessed workaholic? Maybe Patrick and Mia will realize what Zeus the Hiking Cat already knows—that true love eventually always finds its way.

This series has had my heart from Big Rock onwards, and now the feeling is very much bittersweet. I hate saying goodbye, but talk about doing so on a high note! Patrick and Mia's story was an absolute joy to read. There isn't a heck of a lot of angst or drama (par for the course), but even whatever issues they may have are pretty easy to overcome (communication, people!). Yet, even with angst-free read, their story was irresistible to an angst addict like me. And the absolutely wonderful addition had to be the special third-person, erm, third-cat perspective coming from an observant cat named Zeus. There are also the cameos of previous Big Rock characters, which were like bonus epilogues for each couple. Big Rock is one of my all-time favorites, and Hard Wood snags five-plus stars. ♥

Read my reviews for the Big Rock series: