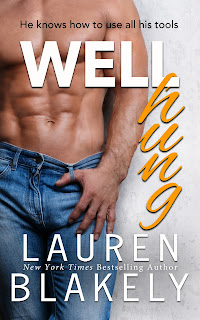 I raise an eyebrow. "I'm thinking there's one more thing that would make this the full Vegas experience."

She clasps one hand to her mouth then lets go. "Oh my God. Are we really going to do what they're doing?"

"I don't see that we have a choice, given the deal we made back at the New York, New York bar. Go big or go home."

For a moment, there's nothing but silence. I don't have to wait long for an answer, though.

"Go big, Wyatt," she says, her voice soft, but her intention loud. Clearly, she thinks my idea is brilliant, too. How could she not?

Dropping down to one knee, I grab her hand. "Frisky Mittens, want to go to a twenty-four-hour chapel and tie the knot?"

She hiccups, then laughs and tugs me in for a sloppy kiss that tastes like tequila and fruit mixer. "When in Vegas..."


I love romantic comedies. There's just so much drama and angst that I can deal with in the books I read, not that rom-coms don't have small doses of those thrown in to keep things interesting. The best kind of rom-com, at least as far as I'm concerned, is the kind that can actually make me laugh out loud. Some have pulled a smile or two from me, others have even made me giggle, but the rarefied few have enticed actual laughter, sometimes with a snort, other times more ladylike. Now, the rom-coms that bestselling author Lauren Blakely? Those are the extraordinary ones. Maybe it's the fact that they're written from the male main character's point-of-view, which often leads to unfiltered thoughts and feelings shared with the unsuspecting reader, but if you've read the three currently available books in the Men of Rom Com series, which used to be the All-Male POV Revue, you shouldn't be all that shocked by the stuff that we're privy too. I adored Big Rock and Mister O. As for Well Hung, it had me at "Leisure Suit Larry", aka Larry Laffer.

Wyatt Hammer's construction and carpentry business is doing rather well, if he does say so himself, and that's due in large part to his assistant, Natalie Rhodes. She's a huge asset to Wyatt professionally. Personally, however, Wyatt refuses to even think about her, erm, assets. You see, Wyatt learned his lesson courtesy of a greedy ex-girlfriend. He doesn't mix business with pleasure and his friendship with Natalie is important to him. No way would have even risk losing her as a friend or as an assistant to see if reality lives up to his fantasies of Natalie. When they're asked by an important client to fly to Vegas and give an estimate on a potential project, Wyatt knows he can handle being around Natalie. They've never crossed the line before, but now, in the very place that's been called "Sin City", they're traipsing over that very blurry line. He's had many an inappropriate thought of the woman he's with, but there's a difference between sleeping with Natalie and actually marrying her. A happy ending for them should mean a quickie divorce and to return to their once easy relationship. Nothing is easy when you start falling for your wife.

An impromptu, drunken wedding in Vegas that leads to one or both participants waking up with a hangover and regrets is a familiar theme in romance novels, but this third installment in the Men of Rom Com series has that creative touch that only Lauren Blakely can give it. It's naughty in the best possible way, and I'm not just talking about the sex that goes on between Wyatt and Natalie. These two are so comfortable in their own skin and around each other and the ease in their friendship is seen in how they simply click together. Of course, an unplanned wedding complicates things and reading about how they try to maneuver through all their unearthed feelings and the complexities of being husband and wife while also being boss and assistant make for an entertaining read. Wyatt trusts Natalie but that one experience with an ex-girlfriend has him making assumptions about Natalie's perceived actions, which, of course, only lead to more conflict. There's a unique twist in their love story, one that I never saw coming, but one that felt like it was the proverbial cherry on top of this delectable and delightful rom-com. With the series already guaranteed a spot on my year-end list of favorites, is it a surprise Well Hung gets five-plus stars? ♥