Book Spotlight: Blame It on the Cowboy by Delores Fossen 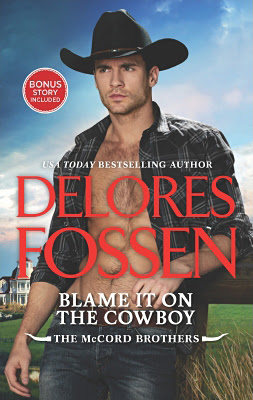 All of Logan McCord's carefully laid plans erupt the day he walks in on his would-be fiancée getting…well, not so carefully laid. Tonight, just once, Logan is acting on instinct. And that instinct is telling him to say "Happy to oblige" to the cute stranger looking for a no-strings fling with a Texas cowboy.

When chef Reese Stephens made her bucket list, she mistakenly thought she had weeks to live. Not that she regrets her one-night-stand with the gorgeous rancher. But she does regret leaving an heirloom watch as a parting gift. Tracking Logan down is easy. Walking away again is another matter. Because Reese's crazy past and Logan's battered heart are no match for the kind of chemistry that could turn one night into the start of a passionate lifetime.

Read my four-starred review on Blame It on the Cowboy.

Add Blame It on the Cowboy on the Goodreads.

About the McCord Brothers series
What Happens on the Ranch

In a sweet and sexy prequel novella to USA Today bestselling author Delores Fossen's The McCord Brothers series, a soldier on leave returns to Spring Hill, Texas, where a summer fling is about to reignite

It all started in the hayloft. That's where Anna McCord lost her virginity to Heath Moore when they were teenagers. Nine years later, Heath, now an air force officer, is back in town. For Anna, the boy who stole her heart is long gone, replaced by a man who's filled out everywhere. Her overprotective brothers might want her to stay away, but what harm can there be in a secret, exhilarating affair?

Sure, the McCord boys will beat him to a pulp if he lays a finger—or anything else—on Anna. That's not why Heath is trying so hard to resist her. Soon he'll be leaving, and he has no intention of breaking her heart again when he does. But some mistakes are worth repeating—especially when second time around might lead to forever…

Texas on My Mind

The McCord Brothers are the most eligible bachelors in Spring Hill, Texas. But these cowboys are about to get wrangled by the love of some very unique women—the kind who can melt hearts and lay it all on the line.

Air force captain Riley McCord has come home on medical leave to find one heck of a welcome reception. Every unattached woman in Spring Hill, Texas, wants to nurse him back to health. That includes his childhood friend Claire Davidson—the only person who understands how damaged he really feels. In high school, she chose his best friend over him. According to Riley's rules, that should make her off-limits forever. But when Claire suggests a no-strings fling, he can't refuse.

Claire always wanted Riley—but she also craved the safety and stability he couldn't offer. So she chose another path, only to end up crazier about him than ever. She's even convinced herself that this time she won't be devastated when he leaves. Yet once Riley realizes the depth of Claire's feelings—and his own—he'll have to make the ultimate choice: return to the job he loves or stay home for the woman who's always lived in his heart.

Ranch hand Rico Callahan struggled to earn everything he has, but sitting proud at the top of the most successful cattle operation in Texas doesn't change that he was born unworthy of Spring Hill sweetheart Natalie London. Their elopement years ago was a mistake. Their quickie divorce was supposed to put it all in the past. Now Natalie's back in town claiming they're still married—and everything's at stake.

Natalie can't wed the perfect-on-paper man her domineering father chose for her when she's still married to her true love. And she definitely can't walk away when seeing Rico again only makes her want him more than ever. Sex for old times' sake sounds better than good, but one touch shows them what matters—and what they'll have to risk to turn a sizzling reunion into forever.

No strings attached is pretty much Lucky McCord's calling card in Spring Hill, Texas, but when family is on the line, this cowboy's honor and heart are about to get lassoed, tied and branded

Every family needs its black sheep, and Austin "Lucky" McCord is happy to oblige. The bad-boy bull rider lives fast and loose, until his business partner leaves him an unexpected bequest. Suddenly Lucky is sharing custody of two children with Cassie Weatherall, one of the few homegrown women he hasn't bedded. And not from lack of trying…

Cassie fled her messy past to become a celebrity therapist in LA. So why does it feel so right to come back and share parenting duties—and chrome-melting kisses—with a man she's striven to avoid? Loving Lucky always seemed like a sure bet for heartache. But for this perfectly imperfect family, Cassie might just gamble with everything she's got.

Cowboy Underneath It All

Having a fling with his old flame's little sister—who's suddenly all grown up—is the last thing an air force top gun expects when he comes home to Texas in this digital installment of The McCord Brothers by USA Today bestselling author Delores Fossen.

Fresh out of the air force, Kane Bullock comes home expecting things to be the same. But change can strike anywhere, even Spring Hill, Texas. His old flame is about to walk down the aisle and her little sister, Eliza Wright, has told the entire town she and Kane are an item. Kane makes it his mission to confront his “girlfriend” and tell everyone the truth…until he sees that Eliza is all grown up and impossible to resist.

Eliza's attraction to Kane didn't disappear when he stepped into a flight suit. Now that he's back, she intends to show him the cowboy he was meant to be. Helping him rebuild his ranch is the perfect opportunity to step out of her family's shadow and prove her business skill. But how can she go through with a simple plan to pretend to fall in love when everything she feels for Kane is real? 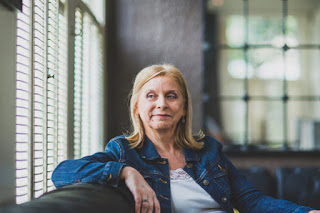 When Delores Fossen was a child, she used to sneak around and collect fingerprints, hair strands and fibers left by family members and guests. At age eight, she solved a crime. Well, sort of. When someone nibbled off the ear of her chocolate Easter bunny, she searched for clues and soon discovered that her sister had chocolate bunny breath. With that "case closed," Delores believed she’d discovered her calling--she wanted to be a Texas Ranger or FBI agent. But after realizing that she just wouldn't be very good at chasing down bad guys, she opted for a slightly different career path--she creates fictional cowboy cops and other law enforcement officers. Writing romantic suspense is something she enjoys immensely, and it has earned her the Romantic Times Reviewers Choice and Booksellers Best Awards, and she was a finalist for the prestigious Rita.

Married to an Air Force colonel and the mother of four children, Delores has lived in England and all over the U.S. She’s had a variety of careers and jobs: an Air Force captain, a special ed teacher and a rehab counselor. None was as fun or challenging as the time she’s spent as a stay-at-home mom. She still collects fingerprints, hair strands and fibers every time she dusts or vacuums, which isn’t very often.