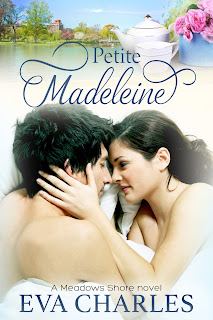 Petite Madeleine is the third book in Eva Charles's Meadows Shore series and is my favorite one so far. The series has definitely gotten better with each new book, with the author's storytelling holding my attention more now than it did with the series starter. In this latest addition, readers get to know all about the second chance love story of Andrew Harrington and Cassia Anteros, who shared three wonderful years together before Drew's grief tore them apart, leaving Cassie to face her unexpected breast cancer diagnosis without the man she loves by her side. They go on to lead separate and very different lives than what they had planned as a couple. A decade later, Drew is the general manager for the Boston Blues while Cassie owns her own bakery in Baltimore. When they see each other again, Drew sees it as a second chance to make things between them right and pursue another shot at being together. But Drew has never known about Cassie's bout with cancer and Cassie doesn't know if she'll ever be ready to share any of it with Drew.

This had the expected drama and angst that both its predecessors had, but with the storytelling much smoother and with a pair of main characters that already had a history. Drew's and Cassie's back stories led to the end of their relationship and to their ten-year separation, but it also shows how they were able to overcome the challenges they were faced with. Even though they weren't together, they had the love and support of their respective families, continuing the series arc of love for family as well as finding love with one's soul mate. I enjoyed reading about how Drew and Cassie fought their way through all the insecurities and uncertainties that were hounding them on their journey to finally reach their happily-ever-after. I liked how Drew's brothers teased him yet were also there in a more protective sense, not wanting him to experience heartbreak again. Overall, Petite Madeleine proved to be a satisfying read, one that highlighted the importance of love, family, hope, and second chances. Book three easily gets 4.5 stars. ♥

Read my reviews for the Meadows Shore series: