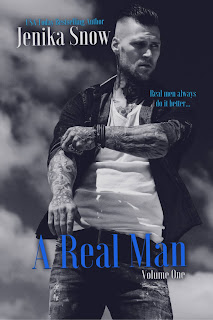 A Real Man: Volume One consists of the first three stories in the A Real Man series—Lumberjack, Virgin, and Baby Fever—from bestselling author Jenika Snow. Each story stands alone, making it possible to read them independent of the others and in no particular order. The author promises happily-ever-afters and makes good on that promise. This omnibus is my first Jenika Snow read and I was able to get through it in one sitting, enjoying the three stories and already looking forward to the fourth installment, Experienced, which fans of the series won’t have too long to wait for since it’ll be released on September 29. Four stars for this first volume.

Lumberjack is the story of thirty-five-year-old Jake Braxton and twenty-nine-year-old Vivian Clarke. Jake has spent five years on his own and when Vivian stumbles upon his cabin and ends up staying with him overnight due to a storm, things become heated really quickly. “Pent-up” would probably be understating how things turn out for Jake and Vivian. There was an instant sort of connection going on, even though she was a bit wary of him in the beginning. One of the things I did like best about this story was how everything played out after the storm because, not counting the epilogue, of course. If I had to give this an individual rating, it would be 3.5 stars.

Virgin was very different from the first story. Here we have two eighteen-year-old high school seniors who have also been each other’s best friends since they were children. Both Quinn’s and Isabel’s lives have revolved around one another and neither one is aware of how in love the other one is with them. There were equal amounts of sweet and steamy in this particular novella and I found myself enjoying this more than I did the first story in the volume. There was no insta-love here, not when the love these two shared was fostered for years and I loved that it was founded solidly on their friendship. This was a good, quick friends-to-lovers romance and gets four stars.

Baby Fever had a falling-for-your-best-friend’s-sibling feel to it and is the story of thirty-nine-year-old Dex and twenty-nine-year-old Eva. She’s always had feelings for her brother’s best friend, feelings that she believed were unrequited, so when he approaches her and tells her that he not only wants her but he wants her to be the mother of his children. This played out in a way that I wasn’t expecting and I quite enjoyed the tension between these two and how raw and real their feelings were for each other. Among the three stories in this first volume, I must admit that Dex and Eva’s was my favorite and ended the omnibus on just the right note. This gets 4.5 stars. ♥

Purchase A Real Man: Volume One on Amazon.