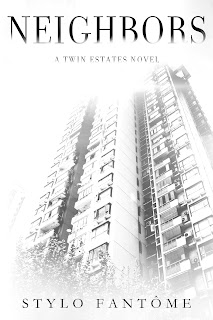 Well, I was looking for different and I certainly got it with my very first Stylo Fantôme read, Neighbors, which is the first novel in her Twin Estates series. The author took the story of one young woman wanting to peel back her very vanilla layers and expose the far more sexually adventurous side of her and added two men who pushed her boundaries in ways she would never have even considered agreeing to. This novel has eroticism, something that can be easily found in many other stories, but Fantôme has put her own creative spin on it. And yes, there is clearly a triangle that exists, but it's not the kind of triangle that you may have come across before. If you're the type of reader that considers this sort of a thing a no-go, I would just like to point out that both relationships are known to all parties from the get-go, so that may play a part in your decision to read or not to read this book. I do, however, invite you to give it a shot, if only for the fact that the both the story and the storytelling are compelling as well as the main characters.

Katya Tocci needs a little adventure in her life and maybe opening a profile on a dating site is a good start. When her best friend decides to do a bit of tweaking in order to sound Katya more enticing than she gives herself credit for, the profile attracts the attention of Liam Edenhoff, who just happens to be her neighbor. Their first outing proves to be an eye-opening one that shows Katya that there's hope for her yet. When she finds herself on what turns out to be a date with an old neighbor, Wulfric Stone. His sudden interest piques her own curiosity. Soon, Katya is caught up in two very different who take her out of her sexual comfort zone and into a whole new delectable dimension of sexual satisfaction and pleasure. But as sexually freeing as it may be to have two men in her life, Katya can't deny that's falling for one of them more than she is the other. Everything has been fun so far, but when feeling become involved, it becomes far more complicated. Does either man feel something more for her or are they merely being neighborly?

Liam and Wulf are a study in contrasts, as are Katya's relationships with both men. There's a twist in the story, and it's one that I guessed in the beginning, but I blame that on my being a paranoid reader with a conspiracy theorist streak in me. Katya isn't actually a new adult in that she isn't some virginal college student looking for someone to hold her hand and give her a kiss or two, and yet, she came off as kinda clueless and naive, which is very different from someone who is vanilla. Wulf's ever-changing moods were a source of frustration because his treatment of Katya left a lot to be desired at times, but then he could also be rather sweet in his own Wulf-ish way. Liam grabbed my attention from the beginning and he was obviously the guy with the higher emotional quotient than Wulf. As to who Katya was falling for between the two men, well, you'll have to read the book to find out. Fair warning: this ends in a cliffhanger, and it's a pretty evil one, but there's no way I cannot not read its anticipated sequel. Neighbors receives 4.5 stars. ♥