Review: Call Me by Gillian Jones 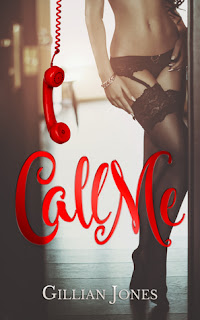 Sexual tension is at an all-time high in this standalone erotic romance from author Gillian Jones. Call Me chronicles the comings (pun intended) and goings of graduate student Ellie Hughes who, upon learning that an injury virtually puts an end to her athletic scholarship, is left with no other option but to work as a Chanel69, a phone sex operator who gains a following but forms a connection with one particular customer named Jake. They share a kinship unlike anything she ever thought possible with a job like hers. But her attention isn't solely held by this faceless voice over the phone line; there's also her professor, Doctor Ace Ryan. He's as gorgeous as he is intelligent, and he affects her in ways that tempt her to consider things she would never have given a thought to with any man, what more a professor. Both men call to her but having anything more than what's expected with them carries too many risks and complications. Her thoughts and feelings provide illicit fantasies, but can she deal with reality when her suspicions are proven right, and will the man she loves be able to accept her, both as Ellie and as Chanel?

I loved this book! I can't recall having read a story as creative as this one and it could have fallen apart had it not been told in the way it was here. It's a slow burn romance, something I can fully appreciate because it did stoke the proverbial fires between the two couples: Ellie and Ace and Chanel and Jake. Admittedly, there were times that I wish things sped up a bit, but I wouldn't say that the story ever dragged. Ellie was such a great female lead character, discovering things about herself she would have probably never even considered she was capable of being and doing if she hadn't joined Breathless Whispers. When she was Chanel, she increasingly became more risque, and over time, she realized that she could be both parts of herself. Ace and Jake were just...le sigh. She had unique connections with both of them, each extraordinary yet she never believed anything could ever come of it. This book also had a fantastic cast of supporting characters who added color and dimension to an already exceptional novel. Call Me may have been my first ever Gillian Jones read but it certainly won't be my last. I'm giving this five out of five stars. ♥

Purchase Call Me on Amazon.