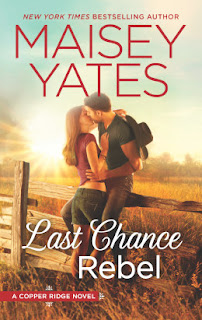 Last Chance Rebel is the sixth full-length novel in the Copper Ridge series from author Maisey Yates. When I added this title to my review schedule, I had actually forgotten to schedule to books that came before it as well. If you're familiar with my reviews, you know that I prefer reading books in a series in order, but life and an overly packed review schedule made it absolutely impossible to do that. So, I decided to simply read this latest release first and then get to the rest of the series much later on (a quick peek at my planner tells me that the possibility of doing so won't crop up until late November). Admittedly, I found myself curious about supporting characters who clearly their own interesting love stories that were already told, but this book does stand alone well even as it obviously ties in with the rest.

For all of her twenty-eight years, Rebecca Bear has never ventured far from her hometown of Copper Ridge, Oregon. She has a business and a home she can call her own and she's learned to live with the scars--both physical and otherwise--left behind by a car accident seventeen years ago. The last person she expects to find darkening her store's entrance is Gage West. The eighteen-year-old boy who was behind the wheel of the vehicle that changed her life forever has returned after a seventeen-year absence. As much as she hates him, Rebecca can't deny how drawn she is to the man before her, the same man who insists on handing her the building housing her store. Refusing to take his charity or accept his pity, Rebecca insists on working as repayment. Will their time together have her falling for the damaged rebel?

Enemies-to-lovers stories tend to be more intriguing than friends-to-lovers ones, at least that's been my experience. In the case of Rebecca and Gage, the reason for the feelings of animosity aren't borne out of a misunderstanding or driven by teenage angst. The dynamic between the two main characters was charged because of the negative feelings mixed with the far more curious and lustful ones. Their relationship develops over time and I liked seeing how they tried to evolve from two people connected by a tragic accident to two people who were falling for each other. Aside from the romance, this was also a story about family, and I empathized with Gage and his siblings as they found their footing as a unit once again. Last Chance Rebel was an engaging, four-starred read and I'll definitely return to Copper Ridge for more. ♥