Review: Into You by Jay Northcote 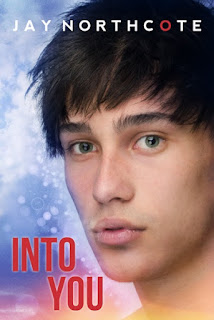 I don't get to read and review as much as young adult (YA) LGBTQIA romances as I'd like to, although I do know there are quite a number of good ones out there, just waiting for me to peruse them. But with most of the books on my reading schedule titles that are up for review, there aren't as many YA LGBTQIA titles for me to choose from as far as blog tours are concerned. Or maybe I'm just looking in the wrong places. So, imagine my excitement when the opportunity to sign up for the tour for Jay Northcote's YA release arrived in my inbox. They had me at "Jay Northcote" and the synopsis sounded fascinating. An hour and a half spent reading and suffice it to say that Into You was a read that quite charmed me from start to finish It left me with a happily satisfied smile on my face and made me determined to find more stories like this.

Oliver Harper and Scott Morgan were best friends before one kiss at the curious age of fourteen changed everything. Four years and one broken friendship later, Olly and Scott are both in their final term before heading to university. They may no longer speak to each other, but an accident forces them to acknowledge the other's presence, even if it is in anger. A neighbor tells them that things between them isn't as it should be, and the following day, Scott wakes up to find himself in Olly's body and vice-versa. They have no clue what's happened or how to fix it, but what they do know is that they can't tell anyone. With revisions, Olly's play, and Scott's football game further complicating things, will the former friends be able to figure things out, mend their friendship, and maybe, just maybe, be honest with their feelings?

The way in which Jay Northcote weaves Olly and Scott's story was exemplary, providing just enough to have readers see how they first cross paths with their mysterious neighbor, Miss Wychwood, and her cat Rowan, as well as a flashback as to what happened to change their friendship four years prior. The opportunity to not just re-discover with what made them best friends in the first place but also to realize that they could have a whole new and different kind of friendship now that they're a bit older and can be more open with themselves about who they are. My favorite thing about the book was its emphasis on self-acceptance with the acceptance of others being important but secondary. Into You has the expected teen angst but its perfectly balanced out by quirky wit and snarky humor. I'm giving it 4.5 out of five stars. ♥

Purchase Into You on Amazon.