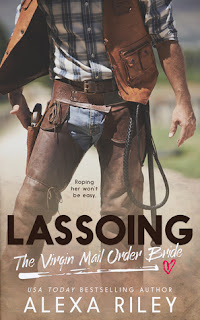 I had no idea Lassoing the Virgin Mail Order Bride was a prequel of sorts to what is now the Cowboys & Virgins series from bestselling author Alexa Riley. When I first read Branding the Virgin, it was impossible not to see it spawning three more novellas since there were four siblings. While reading the newly released second installment, there was a mention of a new supporting character and then there was Lassoing the Virgin Mail Order Bride listed as part of this series over at the end of the book. When I was over at the author's Facebook page, the title was mentioned again and a brief explanation as to its connection to the rest of the series, so me being the kind of reader that I am and with the author's books being quick reads, I decided to finally check it out, and I'm glad I did because it proved to be entertaining.

Clare Stevens knew that becoming a mail-order bride was an unconventional way to find a husband, but the least her would-be groom could have done was meet her at the train station. What she doesn't know is that Cash McCallister had second thoughts and even went as far as having his ranch foreman tell Clare the change of plans and to send her own back home. But when Cash finds Clare with dinner prepared for him and his ranch hands, it's clear that she has no clue about him changing his mind about getting married. One other thing that was clear to Cash? That Clare was the most beautiful woman he had ever seen and that there was no way he was going to let her go now that he'd seen her and spent time in her presence. Can love flourish when jealousies and suspicious activity threaten both their new relationship and their ranch?

Thank goodness this novella met up to the standards set by Branding the Virgin, which is funny when you think about it since that came out after Lassoing the Virgin Mail Order Bride did, but hey, I read them out of order, so I have license to let my logic go a bit askew. Clare and Cash were such great main characters and I really liked a couple of the supporting characters as well, one of whom is the fantasy "baby daddy" that's mentioned in Roping the Virgin, so there's the connection between the two novellas. The push and pull between Clare and Cash was a welcome change from the usual googly-eyed kind of reaction you get from books like this and it helped establish Clare as a woman who refused to be some meek pushover to her very protective and clearly alpha fiancé. Lassoing the Virgin Mail Order Bride was a five-starred read. ♥