Review: Blame It on the Cowboy by Delores Fossen (McCord Brothers #3) 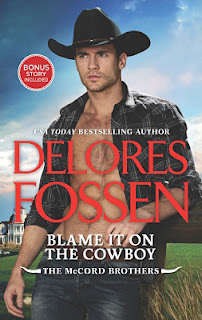 Blame It on the Cowboy is the third and final novel in the McCord Brothers series from bestselling author Delores Fossen. This last story is all about the eldest McCord siblings, Logan, who hates two things most: liars and clowns. What he didn't expect was to have both lead to the end of his longtime relationship, one that he thought was headed to the next level had the proposal he had planned with his family pushed through. So instead of celebrating an engagement, Logan is tossing back drink after drink in a hotel bar wondering if it were possible to scrub the image that was burned into his--and the rest of his family's--eyeballs a few hours earlier. Then he meets a woman who seems to want to drown her own sorrows alongside him and the man from Spring Hill, Texas, who was never known to be the type to engage in one-night stands, has himself one night of amazing sex with a woman named Julia Child who leaves behind a gold watch. What happens in San Antonio stays in San Antonio...until it decides to show up in Spring Hill.

Twenty-nine-year-old Reese Stephens is putting her affairs in order, as she should after having learned she's only got about a month left to live if she doesn't pursue aggressive treatment for an inoperable tumor. She's got herself a bucket list and is checking things off. When she spots the hot cowboy at  the bar of the hotel she's staying it, she decides he's the perfect reason to check off number seven on her list. No names, no personal information; just incredible sex to keep her warm during her treatment. She even leaves him her beloved grandfather's gold watch since giving away her stuff was on her list as well. But then Reese gets a phone call that lets her know that the life she thought was coming to an end...wasn't. So, what's a woman that gave away her most treasured material item to do? She heads on over to Spring Hill and decides to find her hot one-night stand, but her cowboy doesn't seem all that thrilled to see her in his hometown. All she wants is the watch, but things don't go according to plan for her or for her hot cowboy.

As sad as I am that the McCord Brothers series has come to an end, I'm happy to say that it ended on a high note, with a story that was equal parts dramatic and comedic. The town of Spring Hill has itself a kooky collection of quirky folks and they bring some appreciated levity to the oftentimes complicated and angsty lives of the McCords and the people who fall in love with them. Reese and Logan were opposites, but they were able to give each other that balance that seemed to ease whatever burdens they were carrying on their shoulders. Logan and his siblings have come so far from how they were at the beginning of the series, and the family dynamic was definitely one of my favorite things about the books. This particular version contains the Cowboy Underneath It All novella about Kane Bullock, a former Air Force captain but born and bred cowboy, and Eliza Wright, younger sister of his now-ex-girlfriend. This was a quick but funny read and one that I enjoyed alongside Blame It on the Cowboy. Both stories receive four out of five stars. ♥

Read my reviews for the McCord Brothers series:

Texas on My Mind with What Happens on the Ranch
(books 0.5 and 1) - four stars - My Review

Cowboy Underneath It All with Blame It on the Cowboy
(books 2.5 and 3) - four stars - My Review (posted above)

Purchase Blame It on the Cowboy on Amazon | B&N | Kobo.