Review: The Flight of Hope by HJ Bellus 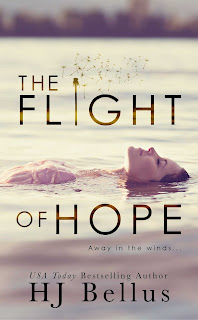 The tears rolling down my face sting with bitter reality. They’re dead. I’m alive and alone. Inhale. Exhale. The pain is all the same and grows daily by bounds. I open my eyes, glancing over to the butcher knife. It calls me to me every single day even as the year has drifted by. Its voice is growing more determined and higher in decibel each passing day.

The Flight of Hope is the latest standalone from bestselling author HJ Bellus and it also happens to be my very first read from her. When I'm about to decide whether to read a new-to-me author's work or not, I do a bit of research and go through a few reviews on Goodreads. It's my way of getting a feel for what kind of stories they write and how other readers have reacted to their current and slash or previous work. So yes, I had inkling that Bellus was an author who had a fan following and had received a ton of positive reviews for each of her already published books. Add to that a synopsis that called to the deepest part of me as a lover of fiction in general and romance in particular, and there was simply no way I could say no--and it's become one of my best book decisions of the year.

The book opens to Marlee Foster saying goodbye. Bentley was supposed to return from deployment in time for them to welcome Hope, the daughter they were so looking forward to finally having in their arms. Instead, Fate knocks Marlee down not just once but twice. She's lost the man she thought she'd spend the rest of her days with as well as the child they were excited for. The reminders of everything that's been taken from her become stifling, and Marlee decides the only thing she can do to keep hold of her sanity is to turn her back on the life she once had. Her new journey begins and it takes her to the wilderness. As she learns the lay of the land, so does she learn to navigate the second chance at living and--with the appearance of country star Jed Bryant--at loving once more.

I wish I had the right combination of words that can explain to you how wondrous and inspiring of a The Flight of a Hope was. You would think that what Marlee had to go through was devastating--and it was, but ultimately, she was given something that not everyone is able to have. This woman was able to experience true love twice over. She had her first love in Bentley and her last with Jed. Yes, she suffered loss twice as well, but instead of wallowing in misery, she did what she believed was best for her, choosing to not allow the thoughts and feelings of family and friends interfere in her own form of mourning and then starting over. We have her story--the one she shares with Bentley as well as the one with Jed--and even when grief threatened to drown her, hope remained. Five-plus stars. ♥

Purchase The Flight of Hope on Amazon.