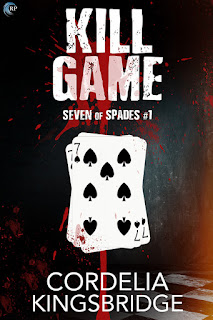 Levi looked up at him. “It’s a little disorienting, finding out that everything I’ve always assumed about you was wrong.”

“Tell me about it.” Dominic had thought Levi cold and aloof, unemotional, but nothing could be further from the truth. The past few days had proven how much was simmering under the surface; Levi had to keep himself strapped down so he didn’t boil over and burn everyone around him.

Before Dominic understood what was happening, Levi slid his hand up to grasp the nape of Dominic’s neck and pull him into a kiss.

When I read Cordelia Kingsbridge's debut release in 2016, Can't Hide From Me, I found myself impressed and eager to see what the author would have up next for readers. A bit of poking around on Goodreads shows she had previously posted original stories that received rave reviews, but those aren't available any longer, so I waited...and waited...and waited. Okay, the wait wasn't like years, but that's what it felt like. And then there it was on the Riptide Publishing website--Kingsbridge's next book. Not only was it a full-length novel but it was going to be the first in a series. I felt a strange flutter in my chest at that tidbit, I kid you not! My expectations were high because this series starter could make or break my decision to keep reading the rest of Seven of Spades. So, were those lofty expectations met and was the never-ending wait worthwhile? Why, yes. Yes, they were and yes, it totally was.

Seven of Spades is going to be a continuing series with the same main characters all throughout and a host of peripheral and supporting characters that'll be constants as well. Set in Las Vegas, Kill Game introduces readers to homicide detective Levi Abrams and bail enforcement agent (aka bounty hunter) Dominic Russo. Levi isn't as charmed by Dominic as much as others who've encountered the man, but he's got a possible serial killer to chase after, a series of mandatory sessions with a shrink courtesy of a fatal shooting he was involved in, and a three-year-long relationship to either keep holding on to or finally let go of. It seems, however, that the hunt for the perp nicknamed Seven of Spades has Levi's and Dominic's paths intersecting again and again. While the benefits of working together outweigh the risks, their partnership may well cost Levi his relationship or even worse, their lives.

As you could probably tell, this book falls quite nicely into the romantic suspense category, one of my personal favorite romance sub-genres. Kingsbridge makes it clear how adept she is when it comes to inspiring tension between her main characters because it was there in spades, pun not intended. It was so good that I could feel my heart clenching and my tummy tensing up at various points in the story, and that feeling wasn't reserved for when Dominic and Levi were trying to figure out who Seven of Spades was. From Levi being in a relationship, albeit a faltering one, to Dominic being a recovering gambling addict, these two had layers of complications stacked upon them, but damn, how I desperately wanted them to overcome every single one because their chemistry was seriously palpable. Kill Game was an absolute thrill to read and even with the cliffhanger, it still gets five-plus stars. ♥