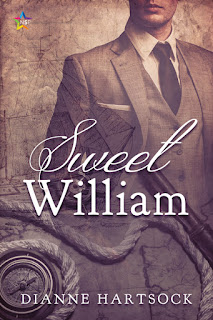 Sweet William is a novella written by Dianne Hartsock and falls under the historical romance genre. This second chance romance has nineteen-year-old William Wilkerson unexpectedly running into his former tutor, twenty-two-year-old Fredrick Hanlon, three years after their secret affair was discovered by William's father. William is now at the helm of the family's shipping empire, and he remains as wealthy and unattainable as he once was--at least as far Freddie has always seen it. What could he ever be able to offer someone above his station? But Freddie isn't the only one who fears that he isn't worthy. William is no longer the sweet and innocent boy Freddie fell in love with. But while their insecurities may get in the way of their reunion, something more sinister could end it forever.

This was my first read from the author, and because it's a novella, it's a very quick read that tended to feel rushed, thereby not being as thoroughly fleshed out as I would have wished for. William and Freddie fell in love when they were sixteen and nineteen, respectively, and three years pass before they see each other again. In that amount of time, Freddie has struggled to make the most of his tutoring assignments, and William is now the head of a shipping enterprise. At nineteen. Oh, and he's had sex and a lot of it. Case in point: he was with one man right before seeing Freddie again and then there were two others afterwards. All this in one night. Some of the things he did were not exactly in private either, and this tale was in the late 1800s and certain acts were considered criminal.

There's a lot of sex--penetrative and otherwise--that occurs in the book, to the point that it distracts from the meatier (pun so not intended) parts of the story that had potential. There's a suspense element involving a kidnapping and assault. This happens twice. To the same person. By the same perpetrators. Sigh. In short, William comes off as very much a manwhore in the three years he and Freddie haven't seen one another, while Freddie isn't just wallowing in desperation because he doesn't know where his next paycheck is going to be come from, but he falls victim to the same villain and villainous acts twice. Instead of all the sex, I wish there had been more time spent on William and Freddie's reunion. Sweet William held some promise but, sadly, it did fall short. Three stars. ♥