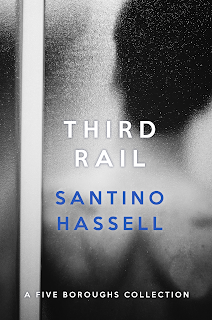 Let it not be said that I didn't give you fair warning: This Five Boroughs collection should be read in the privacy of your home or wherever else you aren't surrounded by people. Hell, I read this in my bedroom and by the time I was done, I snuck a peek at my dog just to see if he knew his mother was reading yet another dirty book. Snicker. Cough. This freebie (yep, FREE!) contains four shorts involving the triumvirate that is Christopher Mendez, Aiden Fairbairn, and Jace Fairbairn. Chris is single and while he doesn't hide the fact that there have been men who've caught his attention, he's only ever been with women. On the other hand, Aiden and Jace have been together for years, but the couple is an open marriage and have been known to engage in polyamorous activities. All three men being together could prove to be too disastrous or a dream none of them realized they wanted or could ever have.

The short stories here chronicle the beginnings of the three men. In a three-sided relationship, there has to be a firm connection among all sides, and in the case of Chris, Jace, and Aiden, it happens in stages and what we have here are the highlights. Are they in a relationship? That's difficult to say, especially considering there's quite a bit of two-steps-forward, three-steps-back that happens here. I won't say who waffles or hesitates, but suffice it to say that I understood why he was as unsure as he was, ESPECIALLY after you're done perusing the excerpt the author has included from the upcoming Citywide book. Third Rail was a teaser times four plus one and if this doesn't get you all excited over the mid-November release of Citywide then I don't know what will! If you had doubts Santino Hassell could pull off an M/M/M scene, check out Sutphin Boulevard then devour Third Rail, which gets five stars. ♥