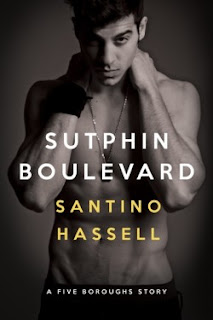 Why did I keep pushing everything that was happening between us—that had been happening for months—aside? What was the point of packing away reality when I could think back to the last time we’d been together—his body crushing mine to the bed, our fingers twined together while we stayed locked in a languid kiss—and see so clearly that there was more between us than being best friends who had good sex? Yet… I’d given him the impression that there wasn’t more between us or that if he thought there was, it was all in his head.

I've had the first three books in Santino Hassell's Five Boroughs series for a couple of months now--thank you, Dreamspinner Press sale!--but I've been holding back on reading them, waiting to read them in order before the release of the fourth and latest one. So, here I am, finally done, with all four, and can I just say that I kinda feel like such an idiot for not having read these when they first came out? These books are my new addiction and while the author isn't new to me, having read his on-going co-authored Cyberlove series with one of my favorite go-to authors, Megan Erickson, this is my first solo read for him, and it was like eating bacon. One slice, erm, title wasn't enough, and I gorged myself on the angsty, sardonic, and sizzling goodness that was the stories and men of the Five Boroughs series. Four books and I still haven't gotten enough, so I'm keeping an eye out for all future release dates, reserving at least two spots since that's how many were mentioned in the new book. But, I digress (again)...

Everything starts with Sutphin Boulevard, which is about Michael Rodriguez and Nunzio Medici, both thirty-two and teachers at McCleary High School. Michael and Nunzio have been best friends for over two decades and have been the greatest source of support for one another. They're both gay, but Michael has yet to come out to his family, while Nunzio's parents turned their back on him long before he even shared his sexuality. Michael's break-up with his cheating ex has Nunzio pushing him to go out and find someone to have some rebound sex with. This leads to an encounter between the best friends that, as weeks and months pass, neither can chalk up to nothing more than a passing thing. But Michael already has a lot going on with his ailing father and his aimless younger brother that wrapping his head--and his heart--around what's going on with him and Nunzio is the least of his worries...until the possibility of losing his best friend, now the man he can't stop thinking about, feels all too real.


Friends to lovers stories are my top personal favorite when it comes to romance tropes because there's already an existing foundation between the main characters and yet the transition from platonic to romantic love isn't as easy or simple as one would think. Michael has a lot going on, so much so that he fails to notice what's right in front of him, and this becomes a case of only realizing the importance of something--or someone--once they're gone or the very real threat of them leaving is present. Aside from Michael's relationship with Nunzio, it's his relationship with his younger brother that captures my interest, mainly because he tries to shelter Raymond from a lot of the negative stuff with their father, yet he's frustrated with Raymond's lack of direction in life. However, Raymond is observant and perceptive, and he notices things others don't, giving him a more well-rounded view of certain things. Michael is as non-confrontational as one can get, but this leads to him dealing with his stress and anxieties in a more destructive yet familiar way. Sutphin Boulevard had a raw honesty to it and I'm handing it five-plus stars. ♥