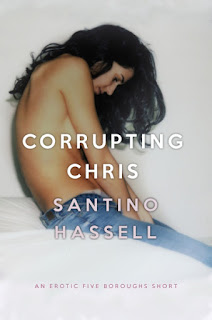 Corrupting Chris was an unexpected little nugget of Five Boroughs goodness that author Santino Hassell decided to unleash and it was a freebie at that! Those familiar with the series will recognize the aforementioned "Chris" in the title, that being Christopher Mendez, and this short story is one he shares with Raymond Rodriguez and Stephanie Quiñones. Within their close-knit circle of friends, Chris's lack of game is no secret. He doesn't take offense when his teased about his sadder than sad sex life. It's true that he doesn't get as much action as the rest of his crew. So maybe that's why Ray and Steph are okay with him sneaking a peek or two (or twenty) while they have sex in his apartment. But Steph has been hoping Chris will take her up on her invitation to join--not just her, but Ray as well.

This short story takes place four years prior to when the Five Boroughs stories started in 2015. Chris is one of those side characters that I've been itching to learn more about, and with this short, I didn't even have to wait until the release of the series anthology! Win! There's no denying that the Queens Crew is one that's super close, but I don't think all groups of friends get as up close and personal as Chris, Raymond, and Steph do here. As hot as the three are together, this is a testament as to the level of trust they have going on. Ray's already gotten his happy ending, and this snippet has me even more antsy to find out what the author has in store for cutie Chris and sassy Steph (that sounds even way cheesier than it did in my head) and their significant others. Five stars for Corrupting Chris. ♥