Review: As Sure as the Sun by Elle Keaton (Accidental Roots #4) 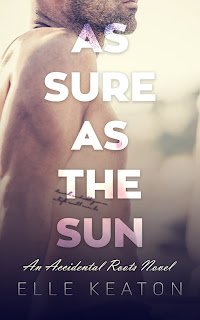 Introduced in the series starter as Adam Klay's younger half-brother and mentioned since then in the rsecond and third books, Seth Culver now gets his own happily-ever-after in the fourth and latest novel in the Accidental Roots series penned by Elle Keaton. He shares this story with Sacha Bolic, who himself was introduced as an undercover US marshal in the second installment. After realizing that he was done with the rough and tumble life as a marshal, thirty-nine-year-old Sacha decides to plant roots in Skagit, Washington, a town not all the unfamiliar to him. He buys a building and proceeds to restore it to its former glory. He's kept to himself, but when he bumps into thirty-three-year-old Seth, they strike up a friendship. Seth's inquisitive nature and fascination with Sacha's building makes him want to poke and prod the quiet man who's more than piqued his curiosity. He wants to know Sacha's secrets, but Seth has secrets of his own and a past that makes him wary about commitment. When hidden artifacts of a forbidden romance come to light, Seth may learn a thing or two about taking a chance on love...and on Sacha.

I do believe I've found my favorite Accidental Roots story so far. This still has some action to it but it's very much toned down and reserved only for the beginning of the book. There's also a mystery element to it, but not the same kind of nefarious crime that needs to be solved. You see, we get two romances here--Sacha and Seth's and that of two other men--Owen Penn and Theodore Garrison--who had to keep their relationship a secret because it was simply something that was not acceptable during that period. While Owen and Theodore's story was heartbreaking, Sacha and Seth's came close to that as well, but thank goodness those who had to come to their senses did. I'm not saying who, but I understood why he didn't feel relationships were something he could invest in emotionally. We're also introduced to new characters--Parker, who is Sacha's foster brother, and Owen Garrison, who is related to Owen Penn, plus Zeke, Parker's maybe-maybe-not ex-boyfriend--and I hope we get to know them better as this series moves forward. As Sure as the Sun was a fantastic read and one that I recommend. Five stars. ♥

Read my reviews for the Accidental Roots series:

Purchase As Sure as the Sun on Amazon.