Review: Drawn to Him by Various Authors 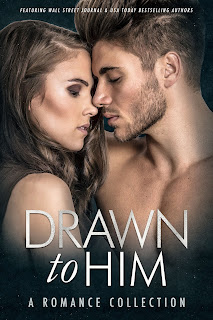 Drawn to Him is a collection of eight brand new stories written by bestselling authors K.L. Kreig, M. Never, L.J. Shen, Isabella Starling, K. Webster, Jade West, Willow Winters, and A. Zavarelli. For the purposes of this review, I read five of the eight stories--The Billionaire's Beginning by M. Never, Doctor Dreamy by L.J. Shen, Fifth Avenue Blues by Jade West, Bad Cop by A. Zavarelli, and One Night by K.L. Kreig. I hope to be able to read the three remaining stories--Infatuation by Willow Winters, Malfeasance by K. Webster, and Datenight by Isabella Starling--sometime in the future. Out of the eight authors, I'd previously read at least one book by half of them, except for Starling, West, Winters, and Zavarelli. So, I decided to go with three authors that I was already familiar with and two new-to-me authors, and it made for a wholly entertaining read because each story had a different flavor to it.

M. Never's The Billionaire's Beginning is a spin-off of her standalone Trinity, which I absolutely loved reading in 2016. If you've read that book, then Ty Winters should be a more than familiar name. Here, he gets his own chance at the happily-ever-after his two closest friends already have with the love of their life. He's taken by Simone from the moment he sees her, but then he realizes she's a Travers, his family's number one rival. But while dealing with their joint family history is something Ty can handle, Simone wants to keep him at a distance, no matter the fact that all she wants is to pull him closer. These two had the good kind of tension and I loved seeing the far more romantic and protective side of Ty. Another bonus had to do with Jenn Reeves, Shane Laughtner, and Chase Hammond making their presence felt. The Billionaire's Beginning was one of my favorites here and gets five stars.

Doctor Dreamy pits a temp named Savannah Martin against the hot but arrogant pediatrician who happens to be her boss, Dr. Rhys Matthews. Working for the man and his estranged wife isn't exactly a walk in the park, not with his soon-to-be ex barely acknowledging her presence except to warn Savannah off Rhys, the guy who's frustrated with her and doesn't bother to hide the fact that it's because he wants her. But he's technically still married and the last thing Savannah wants is to get in the middle of the situation Rhys is in with his wife and son. What's a girl to do when falling for the dreamy doctor could lead to a nightmare of a problem with his ex? Well, if you're looking for any sort of confrontation here where Savannah stands up to Rhys's wife, you won't find it here. There is, however, a fair amount of hot sex, dirty talk, and mildly sweet romance. L.J. Shen's Doctor Dreamy gets four stars.

Jade West is one of the new-to-me authors that I decided to try out and she's got a reputation for some really raunchy erotic romances. She lives up to it with her contribution to this anthology, Fifth Avenue Blues, which has two former schoolmates meeting up several years later and falling for each other. Emily Foster was the smart girl that others didn't see as pretty and Kyle Prescott was the gorgeous guy with a secret learning disability. Everyone went their own way, but now Kyle needs Emily to help him land a role on a television show. There's a bit of a misunderstanding between the two from what happened with a shared kiss, but that crush they secretly had on each other was clearly NOT unrequited. These two have LOTS of sex, and I'm good with that. However, I wasn't a fan of the names he called her in his head since they came off as demeaning. Fifth Avenue Blues gets three stars.

A. Zavarelli is the other new-to-me author I took a chance on and it was a well-rewarded one because her Bad Cop novella was also a favorite of mine. This was a second-chance romance between the former teenage bad boy turned town sheriff and the former golden girl turned outsider, Justice Grayson and Ginger Duke. She had quite a cache of secrets, all the way back to when she was growing up, and he was the boy who fell for her but then she went ahead and hurt him. Years later, their paths cross again, and goodness but how these two had all the sexual tension brewing between them but there was also all these unresolved issues. I seriously wanted to sit them down so they could hash it out and move on with their second shot at being together, but I certainly have no complaints with how everything played out here and that mystery suspense aspect made it even better. Five stars for Bad Cop.

The final story in the collection is One Night by K.L. Kreig and it's how a one-night stand can turn out to be a life-changing one and how Fate never ceases to surprise us. When Saine Campbell hooks up with the gorgeous bearded stranger after her cousin's wedding--the same cousin who married Saine's ex-fiancé!--she knows it can be nothing more than exactly that--a hook-up. Four years later, there's another gorgeous man in her life, but Bennett Montgomery is one she'd rather do without. He pushes all her buttons and he does it on purpose. But he's got his reasons and they're not really all that difficult to figure out either. Still, I liked the tension and there was one hell of a twist I didn't see coming. There were also supporting characters who piqued my interest, to the point that I wondered if this were a prequel to a future series from Kreig. Hmmm... I'll be watching! 4.5 stars go to One Night. ♥

Purchase Drawn to Him on Amazon | B&N | iBooks | Kobo.