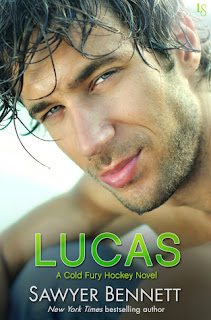 Sawyer Bennett's highly popular Cold Fury Hockey series is back and for her eighth release, Bennett gives us Lucas, which is the story of Lucas Fournier, who has just been traded to the Carolina Cold Fury and will be playing beside his older brother Max. Luc wants nothing more than to help the team defend their championship and gain another title for the franchise. While he dreams of having his own family one day, he's still young and isn't really looking for any sort of committed relationship. So, when he meets museum curator Stephanie Frazier, who is just as gung-ho as he is about hooking up, they're like each other's unicorn--a unicorn who provides one night of unforgettable sex before going their separate ways with nary a backwards glance. Except Stephy comes looking for Luc a month later. It looks like Luc has left her something to remember him by and it's the gift that'll keep on giving for years to come.

Lucas sure as hell had huge shoes to fill, all thanks to his big brother Max and his fab eponymous book, which still remains my favorite one in the series. Luc may not be Max, but he definitely won me over. I swear, the guy could charm the pants off anyone. Maybe it's a Fournier trait--one that Lucas's roommate slash teammate may be immune to, but more on that later on. Lucas doesn't pretend to be someone he's not in this book. He's upfront and honest about his expectations when it comes to his hookups. There are no promises of happy endings and white picket fences, especially not for someone like him who's still happily doing whatever he wants when he wants without having to worry about answering to a significant other. If there were a female version of him, it would definitely have been Stephanie, but then her reasons for remaining unattached are more angst-ridden than Luc's.

What you see is what you get with these two, but while Lucas has the kind of family life that would have made the Fourniers the ideal spokespeople for familial love and togetherness, Stephanie's was more non-existent. My heart broke for her and it was easy to see why she was the way she was and why her view of relationships and intimacy was as skewed and broken as it was. Lucas definitely had quite a few hurdles he was going to have to overcome if he had any hope of convincing Stephanie that they could be more than friends and were worthy to be more than friends with benefits. I quite liked their story, but I did feel as if the ending was a tad abrupt, and I wasn't really a fan of the epilogue being told from Van Turner's point-of view. I get that his enemies-to-lovers story with Simone Fournier is up next, but this was still Luc and Stephy's time in the spotlight. Still, Lucas garners four out of five stars. ♥