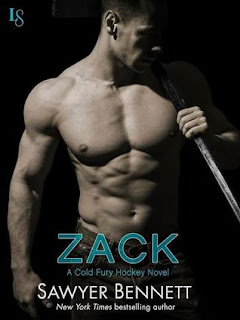 His injuries may have healed but Zack Grantham is still reeling from the loss of his longtime girlfriend and the mother of his son, Gina Toast. He's had the support of his Carolina Cold Fury teammates and from his sister, but he needs to accept that he's going to need a live-in nanny as soon as possible. When his sister hires Kate Francis, he can't help but notice just how plain and nerdy his son's new nanny is. Swimming in clothes too large for her, her hair constantly pulled back in a bun, and her face overpowered by her eyeglasses, Kate is certainly not the kind of woman to make Zack look twice. But with her outgoing personality and genuine affection for Zack's son, Kate is quickly making herself invaluable. When he finally gets peeks at the real Kate, Zack finds himself wanting things that he isn't sure he's quite ready for.

Zack is book number three in Sawyer Bennett's popular Cold Fury Hockey series from Loveswept and takes place four months after the car accident that takes the life of Zack Grantham's girlfriend and has him hiring Kate Francis, a live-in nanny for his three-year-old son Ben specifically chosen by his older sister. She's exactly what both father and son need, even though she may not exactly be someone that Zack wants in his home or life, though it's nothing personal but more of what her being there represents. This was a good story about a man trying to get a handle on his grief and guilt over the death of someone he was in a relationship with for seven years. There's a lot of one step forward, two steps back with Zack but it's understandable because he's obviously got a lot going on in his head, not just with Gina, but with Kate too.

There were times that Zack came off as a complete jackass and while I admire his being upfront from the very beginning with Kate and whatever the heck you call what was going on between them, I totally got the confusion that his words and actions were causing the poor girl. That's the thing with saying one thing and doing the opposite, but it merely highlights how it seemed that Zack's heart was ready to be with Kate but his head kept holding him back. It's difficult to not like someone like Kate, what with her positive outlook and endearing ways, and she took to heart that responsibility of looking after not just her ward but her boss as well. The situation with Gina and Zack's relationship with her was somewhat of a surprise, but it, at least, clarified why they never got married. Zack brought about a flurry of emotions and it gets 4.5 stars! ♥