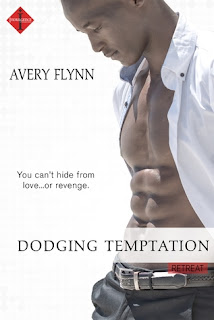 Dodge Loving has kept his eye on the prize since he was sixteen: revenge. He plans to do it by having an investment group sign with the Retreat, their family-owned luxury resort, instead of with his maternal grandfather's hotel group. Things are going according to plan...until he finds out that the ex-wife of a shamed politician is on the premises, unknowingly luring unwanted paparazzi to the area. Privacy has always been a big deal for Dodge, something that he offers all his guests, especially those trying to get away from the trappings of celebrity. He needs to get rid of Harper Conner as soon as possible, but she's proving to be far more difficult to bend to his will than he first thought. However, the more these two adversaries hang out together, the clearer it becomes that giving in to temptation will be an inevitability.

Dodging Temptation is the first novel in the Retreat series from author Avery Flynn and this series starter is about the eldest Loving son and the head of the Retreat, Dodge, and a former political wife turned book appraiser, Harper Conner. For the head of a company, Dodge's treatment of Harper when they first meet was abhorrent. You can have a Type A personality and still know how to practice tact and diplomacy, especially since he was forever conscious about the Retreat's reputation. There were sparks between Dodge and Harper from the very beginning, and while I do think they were very much attracted to each other, what they had just didn't feel like a love connection to me, though it most probably was headed there. Still, Dodging Temptation was a pretty good read and I'm interested to see who's up next. 3.5 stars. ♥