Review: Playing with Fire by Kate Meader (Hot in Chicago #2) 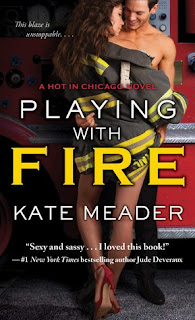 Alexandra Dempsey is more than aware that she has to work harder to prove herself as worthy to be part of the Chicago Fire Department and she's  used to having people question her capabilities as a firefighter, but when the city's mayor voices his own disparaging opinion, Alex realizes there's no way she'd ever vote for Eli Cooper. But with her being tauted America's Favorite Fighter when she rescues him from a hotel fire, Eli's re-election campaign team sees the merits of their candidate spending time with the feisty female firefighter. In order to help him gain more positive press and higher poll numbers, Eli offers Alex a deal she can't refuse. The arrangement is temporary but their attraction appears to have no plans of dissipating any time soon, leaving Eli and Alex increasingly tempted to cross the one line that could cost them dearly.

Playing with Fire is the second full-length novel and fourth story in the Hot in Chicago series penned by Kate Meader. CFD firefighter Alex Dempsey has never made a secret of her dislike for Chicago mayor Eli Cooper and he has made no secret of his opinion of female firefighters and how he thinks they aren't as qualified as their male counterparts. But these two end up rescuing one another during a hotel fire and are later brought together to help with Eli's flagging re-election campaign. Eli is a politician and knows how to work the system, meaning that he's one manipulative guy who makes sure that every situation works to his advantage. But his draw to Alex and his growing feelings for her were something he didn't factor into his plans, and things become far more complicated than they had anticipated, leading to choices to be made.

Eli is one of those characters whose motives you tend to question, something that I started doing from the time he was introduced in Flirting with Fire. But as much as you want to hate him, it's difficult to believe that he's purely the jackass that he comes off to be. There's a story behind the confident smirks and fans of the series get it here. The connection between him and Alex was clear from the minute their paths (and proverbial swords) crossed. I'm glad that Alex was this female lead character who refused to be placed in a corner. She spoke her mind, even when there times she ended up with a foot in her mouth, and was independent but she also loved her family fiercely and loyally. That grand gesture from Eli and that epilogue though? They more than redeemed the guy in Alex's and my eyes. 4.5 stars for Playing with Fire. ♥