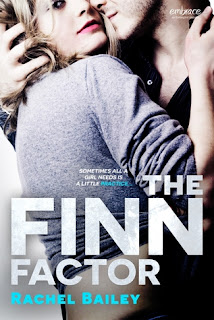 
Scarlett Logan's dating life has been abysmal over the past year, with each guy she's gone out with rarely wanting a second date. Trying to figure out what could be wrong, Scarlett can't help but wonder if her kissing skills are lacking. When she brings up the idea of needing kissing lessons, her best friend and roommate Finn McKenzie offers his services. He knows she deserves a guy worthy of her, which is why he's made sure to warn off her dates, believing that none of them measured up. But that one kiss sparks an unexpected barrage of reactions, physical and otherwise, in both Scarlett and Finn. With their friendship poised between the status quo and leveling up, these two best friends will have to decide if either one of them is ready to take a risk on the unknown and possibly end up losing each other or gaining much more.

The Finn Factor is a new adult (NA) romance from author Rachel Bailey and is a sequel to her 2014 NA novel, The Summer of Jake (which I gave four-starred review to on Goodreads), where twenty-one-year-old accounting student and artist Scarlett Logan was introduced and twenty-three-year-old doctoral student and university tutor Finn McKenzie was mentioned in passing. The best friends-to-lovers trope is a tried and tested one and I often look at how the author puts their own creative spin on it in order to make it their own. Here, Rachel Bailey gives readers two best friends who weren't secretly pining away for each other and did casually date other people prior to them getting together. Theirs is a love story that was based on a friendship that everyone else considered far more than either of the two initially realized.

I'll admit that I wasn't much of a fan of Scarlett's in The Summer of Jake, but then that was because she was standing in the way of the romance between Jake Maxwell and Annalise Farlay. However, my opinion of her did an absolute 180-degree turn here. I loved her easygoing but deep friendship with Finn and it was clear from the beginning that they were each other's "person", that significant individual that they thought of first in anything and everything. But like all friendships that transition into something more, Scarlett and Finn were faced with their own hang-ups from their pasts--Scarlett with her need for stability and security, no thanks to her nomadic childhood courtesy of her hippie parents, and Finn with his inability to say "I love you" and keeping people at arm's length due to the unfortunate death of his parents.

I really liked how the story played out, especially because there were quite a few surprises that allowed it stand out from others that share a similar basic story line. It's these seemingly little touches that make a reader like me appreciate a book more. The fact that the main characters are both charming and have a genuine and true love for each other and care about their families but have their own share of fears and insecurities when it comes to relationships makes them even more endearing. I couldn't help but smile at certain parts of the story and I found my heart squeezing, first in empathy then in hope, at a couple of particular points in Finn and Scarlett's relationship. Add to all that an adorable cast of supporting characters, including Harvey, and The Finn Factor ends up being one of my 2015 favorite reads. Five stars! ♥