Review: A Wedding in Truhart by Cynthia Tennent (Truhart #1) 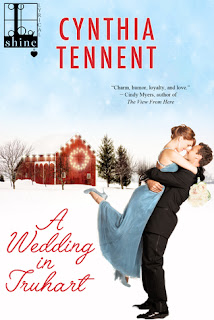 Annie Adler understands her younger sister's need for her wedding to be as perfect as possible. What Annie has a far more difficult time wrapping her head around is the decision to make the wedding fodder for the morning show her sister's a part of. The more details she learns about the wedding, the more she realizes that her sister's decisions are based on what will garner approval from other people, especially the soon-to-be in-laws and work colleagues. Add to that coming face to face with Nicholas Conrad, her brother's childhood best friend and the best man to her maid of honor. Annie and Nick butt heads and can't seem to agree on anything, but when the wedding is suddenly moved to their hometown of Truhart, Michigan, Annie begins to see things--including her own feelings for Nick--from a whole new perspective.

A Wedding in Truhart is the series starter in Truhart and is the debut novel of author Cynthia Tennent and a book that I absolutely adored. This was a story about Annie Adler and how she saw the world around her, especially when it came to her sister's upcoming wedding and how her longtime crush Nick Conrad was living his life, and how she came to a new set of realizations when she learned to look at things differently. There were definitely moments that I found myself wanting to wring Annie's neck for how she treated Nick because she seriously thought that whatever her opinion was was the right one, making me think of her as someone who needed to get off her high horse. But the beautiful thing about the story is how Annie transforms and then embraces her reality instead of trying to change everyone and everything.

This was ultimately a story about living the best life possible on your own terms and not those set by others. It's also about family and how, at the end of the day, family will always be there for you, regardless of the distance between you or how much time has passed. There's also a sense of community that I always look for in books set in small towns but I did appreciate that the comparison between Truhart, Michigan and Atlanta, Georgia was not always disparaging and that every place has its good and bad points. This is the first in a new contemporary romance series and I find myself already looking forward to what Cynthia Tennent has up next for this small town with lots of heart. For a first-time author, she's shown that she's capable of weaving a well-crafted story with interesting characters. A Wedding in Truhart gets five stars. ♥

Pre-order A Wedding in Truhart on Amazon | B&N | Kobo.