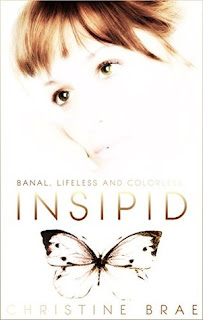 Note: This ebook was provided by Red Coat PR via NetGalley in exchange for an honest review.

From the outside looking in, Jade Richmond would have you believe that she's leading the kind of life other women (and men) would be envious of. But upon deeper inspection, there's a missing piece in Jade's life, one that will probably never be found ever again. Then she meets him--the man who will knock her world off its axis, sending Jade on a roller coaster ride of emotional highs and lows. The question is: will she disembark and return to her life as she knew it, or is she ready to hang on for every dip, rise, and turn?

Insipid is a standalone contemporary romance slash women's fiction novel from author Christine Brae and my very first read by her. This truly was main character Jade Richmond's story to tell and it was one that evoked a myriad of emotions. The men in her life--her first love, Chris Wilmot, her husband, Joshua Richmond, and her new admirer, Lucas Martinez--represent different phases, each one with positive and negative moments that have Jade changing directions now and again on the road to finding peace of mind.

There's no denying that Jade is a highly flawed character, one who had me frustrated more than once, what with her inconsistencies and ill-conceived notions and decisions. Chris, Joshua, and Lucas hurt her in more ways than one, but she did her own share of hurting and I think there were times that she did so with intent, though I don't think she was necessarily malicious. I honestly believe that she needed intensive therapy to deal with what happened to Felicia plus a professional to speak with regarding her other issues.

Lucas turned out to be an enigma. He was becoming increasingly unattractive with his treatment of Jade for a good portion of their non-relationship, and then when the truth is revealed, you can't help but empathize with the guy. He really was a nice person, one who refused to make as big of a deal of the fact that he was thirty-three and that the woman he was falling for was nine years older. My heart broke for him and for Chris and Joshua as well. Then there was Jade, who's own heart seemed irreparably broken.

This book was far more than I expected and was an intense read that I finished in one sitting in the wee hours of the morning. Once I started, I simply had to keep going, needing to get the answers to the questions that were popping up in my head. Christine Brae has created a story that speaks to anyone who's ever loved and lost and to every single one of us who feels stuck in neutral, tempted to go in reverse in hopes of re-discovering something that is possibly no longer meant to be found. Insipid receives 4.5 stars. ♥