Review: Sins of Her Father by Kathleen Mix 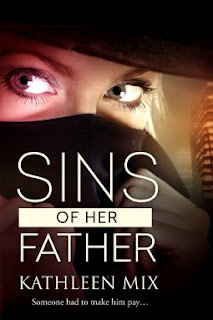 The discovery of her late mother's diary leads Faith Rochambeau to discover the gruesome details of how she came to be. Learning that her mother was raped and that she was the result of said crime leads Faith to want to seek justice and she'll do whatever's necessary to take her father to task, even if it means using her cousin's identity and likeness to do so. Faith becomes Josie Ashland and infiltrates Emmeline's, the family-owned company headed by Victor Telemann, digging up as much information as she can on him. But she's soon distracted by Kent Telemann, her father's stepson, but Kent has his own agenda for getting close to Faith. With all the lies and deceit surrounding her, will Faith ever be able to get to the truth that she seeks?

Sins of Her Father is a standalone romantic suspense thriller from author Kathleen Mix and presents a female main character named Faith Rochambeau who learns the truth about her origins and decides to get the justice her late mother deserves by going after her rapist father. The lengths that Faith goes to in order to gain what she wants proves that she's willing to take risks. Her attraction to Kent Telemann, part owner of Emmeline's and Victor Telemann's stepson, brings with it certain complications, but there were moments that I didn't feel the chemistry between the two of them. That ending also had me raising an eyebrow in mild disbelief because I simply couldn't see them that in love in that particular point in time.

The mystery involving what Victor Telemann was doing with the company--because it's clear that he's doing something unsavory and illegal--was a difficult one for me to figure out and the story held quite a few surprises that I never saw coming. I'm the type of reader that looks forward to moments like those so much deserved kudos to Kathleen Mix for her ability to weave a story that managed to pull the wool over my eyes. So, while I wasn't too convinced with the love story aspect, I did enjoy the mystery suspense thriller part and liked Faith's tenacity, keeping her eye on the prize and knowing that this is what was owed to her mother. Sins of Her Father was good and one that romantic suspense fans may enjoy. Four stars! ♥

Purchase Sins of Her Father on Amazon | B&N | Kobo.