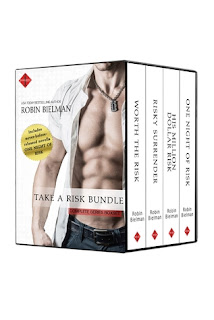 The Take a Risk series by bestselling author Robin Bielman has been put together for a special bundle that includes the first three stories, Worth the Risk, Risky Surrender, and His Million Dollar Risk plus a new, never before published fourth story entitled One Night of Risk. Each story is set in the world of environmental protection and preservation and have one or both of the characters actively involved in the cause and gives the reader a feeling of being part of an adventure. Three of the four male characters--Keats McCall, Connor Gibson, and Clay Doherty--work for the World Heritage Fund while Dean Malloy is the son of the founder and head of WHF and used to work for the organization before starting his own. I'm reviewing and rating the stories separately, with the series receiving a total average rating of 4.5 stars.

Worth the Risk (Book One) - five stars
Samantha Bennett and Dean Malloy fell in love over the summer five years ago, but Dean broke her heart when he walked away from her. Now, they're competing against each other, hoping their respective organizations will be chosen to partner up with the World Heritage Fund for a special project. For Sam, this could ensure her place in the company she's working freelance for, but being around Dean has made her realize that her feelings for him are as strong as ever. But will taking another chance on being with the man she loves be worth the risk of another possible broken heart and her opportunity at job security?

This was a really great start to the series and one that has two former lovers reuniting but both after the same thing career-wise. Even with the competitive nature of their task, Dean and Sam can't deny the connection between them is still there. I loved these two together, especially since they've both matured over the five years that they were apart. When you learn the reasons for the separation, you can't help but think about all those wasted years, but then the present also gets in the way and it's a hurdle that forces them to either walk away again or finally fight for what they want and hope for the best possible outcome.

Risky Surrender (Book Two) - four stars
Keats McCall catches Lucy Davenport in the middle of swiping an emerald ring but she gets away with it before he can stop her. When they meet again, she's at a project site that he's working on. Knowing what she did before, he's wary about her intentions and decides he needs to keep a close eye on her. But Lucy refuses to let anyone or anything stand in her way because she made a promise to her late father and husband and she intends to keep that promise, even with McCall trying to distract her. When he finds out what it is she's after, he's torn between doing the right thing and helping the woman he's now falling for.

This second story was good and I liked Lucy's background story and why it is she was doing what she had to do in the beginning. McCall goes above and beyond to help her out when he sees her again, though I would hardly think that someone would actually do all the stuff he did for someone he barely knows. I mean, I get doing something nice for someone else or wanting to keep someone close because you don't fully trust them and want to keep watch, but McCall's action spoke of someone overly invested in another individual and I felt that it wasn't realistic. Still, this was interesting and entertaining from the beginning 'til the end.

His Million Dollar Risk (Book Three) - five stars
Connor Gibson is not looking forward to spending time on the road with a reporter from a publication that smeared his mother's reputation, but he's got no choice but to spend time with Charlize Beckettt. The thing is, she introduces herself as someone else and Connor has absolutely no clue that Charlie isn't who she says she is. As they check out the various sites along Route 66, Connor and Charlie fall for one another, with Connor opening himself up to her and Charlie sharing her dreams and aspirations with him. But once Connor learns who Charlie really is, he wonders if everything the shared was all a pack of lies.

I quite liked this third story, especially with the lead characters on a road trip and Connor helping Charlie achieve a few firsts in her life. Charlie is endearingly clueless at times, but she remains appealing all throughout. Connor's dislike for the publication Charlie works for is perfectly understandable and while he's somewhat averse to reporters, there's something refreshing about the one he finds himself stuck with. The adventure these two have may not be one that adrenaline junkies seek but it is an adventure nonetheless and it was fun and lighthearted. This is definitely one of my two favorites in the entire series.

One Night of Risk (Book Four) - four stars
Malia Davis has always been the good girl but with her mother now diagnosed with cancer, she's prepared to do something out of the ordinary in order: retrieve a healing crystal from a protected heritage site on the island of Kauai. But then she comes up against the man who broke her heart a decade ago--Clay Doherty--and he just happens to be head for security of the organization working on the site. They've got a lot of history between--majority of them good and one not-so-good--but not even his renewed feelings for Malia can get in the way of what Clay knows he needs to do...even if it means breaking their hearts again.

There are two familiar elements in this fourth story: the first being the second chance trope that the first book also had, and the second being the female lead character needing to get something from a site being worked on by the male lead character, a similar theme found in the second book. Of course, there are enough differences for this one to stand on its own, what with Clay and Malia having been childhood friends and former sweethearts far longer plus the handling of the whole taking something situation. A definite bonus involved having all four couples from the series together and seeing how far they've come.