Review: One Night with a Quarterback by Jeanette Murray (Santa Fe Bobcats #1) 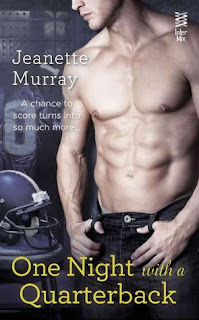 Trey Owens loves his job but being the star quarterback of the Santa Fe Bobcats means having the public watching every single move you make. When his best friend suggests that he does a Clark Kent while they're at a bar, he meets Cassie Wainwright and they spend one unforgettable night together. There's a connection between the two of them and Trey finds himself wanting to spend more time with Cassie. With Cassie's life so complicated at the moment, what with learning who her father is and spending time to get to know him and his family, and being specifically told to not date anyone, the time she has with Trey means a great deal to her. But when Cassie finds out his connection to her father and Trey learns that Cassie is his head coach's illegitimate daughter, things become far more difficult than they both expected.

One Night with a Quarterback is the first book in the Santa Fe Bobcats series from author Jeanette Murray and was a series starter that surpassed my expectations for it. Trey Owens was what you would consider the antithesis of a star quarterback--he wasn't flashy or frivolous and certainly wasn't the type to hop from one bed to another, collecting notches on his bedpost. Then you've got Cassie Wainwright who was independent and confident and was trying to get to know the father and half-sisters she never met before even if it meant having to grin and bear it when her father's wife was around. Trey and Cassie were such great main characters and you really feel for what Cassie's going through with her father and his family. These two could have been as the stereotypical jock and nerd but weren't, so kudos to the author.

The thing with sports romance novels is the tendency for some authors to focus solely on the romance aspect and maybe just add on a bit of sports jargon here and there. The great thing about this book is that you do get somewhat of a feel for the sport of American football plus there was the whole family drama that Cassie was embroiled in plus the love story between Trey and Cassie to make for an engaging overall story. Aside from the two main characters, the book does well in introducing other key players, giving an idea who could have their stories told sometime in the series, namely Stephen Harrison (an offensive lineman and Trey's best friend), Josiah Walker (running back and co-captain), and Anya Fisher (stylist and Cassie's best friend). One Night with a Quarterback was a fun start to this entertaining series. 4.5 stars! ♥

Purchase One Night with a Quarterback on Amazon | B&N | Kobo.