Review: Hold Me Until Morning by Christina Phillips (Grayson Brothers #2) 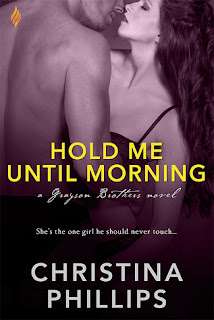 It's been ten years since Cooper Grayson last saw Paris O'Connell, but when his best friend asks him to play bodyguard to his little sister while she takes a week away from her life as a successful television actress, Cooper readily agrees. What he doesn't expect though, is for there to be a more than obvious attraction between the two of them and while he knows it would be best to keep things platonic, Paris tempts him to break his own code of conduct. Cooper's not interested in her fame or fortune, and Paris knows that he's worthy of her love and her trust. But when their respective personal and professional lives expectantly demand their fair share of attention, will their fledgling romance make it past a second week?

Hold Me Until Morning is the second book in the Grayson Brothers series from author Christina Phillips and is about the youngest among the brothers, twenty-four-year-old Cooper, and his best friend's twenty-two-year-old sister, Paris O'Connell. The attraction between the two is instantaneous and as much as Cooper tries to keep his distance from her, Paris is pretty clear about wanting to be with him. They spend an idyllic week away from the usual demands of their lives, and as expected, they'll have to face the challenges that reality and meddlesome individuals set before them. This worked well as a falling-for-the-best-friend's-sibling-styled romance plus readers learn how the Graysons' father's abuse affected Cooper.

I realize that Paris is only twenty-two, but for someone with a decade in a business known for making people quickly aware of certain harsh realities and that has made her wary and cynical, she carries with her an almost improbable amount of naivete. I'm not saying that she wasn't likable, just that she's a veteran actress who you would think was a bit more aware, especially since it seems as if her mother rarely missed a chance to non-sexually pimp her out. I liked Cooper but was disappointed with how he allowed his own doubts and insecurities got the better of him. Still, Hold Me Until Morning was an overall good four-starred read and I'm looking forward to Alex finally opening his eyes to Ella's feelings in the third book. ♥

Pre-order Hold Me Until Morning on Amazon | B&N | Kobo.