Review: Hard as You Can by Laura Kaye (Hard Ink #2) 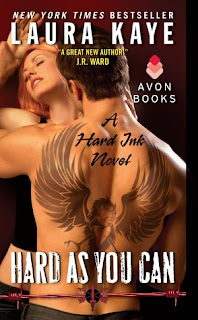 It took one phone call from his best friend--someone who never returned his phone calls or answered his emails for a year--for Shane McCallan to make his way to Hard Ink Tattoo in Baltimore, Maryland. That's what friends do and he's always been someone who would leave no stone unturned for anyone who asked for his help. Maybe it's part of his redemption after not being there for his sister all those years ago. Rescuing the son of his former commander at a strip club was just the beginning and he and his teammates had a little assistance from Crystal Dean, a waitress working there. Now, Shane and the team are trying to find a way to regain the honor that was taken from them in Afghanistan, but he also can't seem to get his mind off Crystal, recognizing her need for help from an abusive relationship. She's keeping more than one secret from him, but Shane intends to make Crystal realize that he's the kind of man that she can count on.

Hard as You Can is book two in Laura Kaye's Hard Ink series and overlaps a bit at the beginning with the rescue of Charlie Merritt that took place in book one, Hard as It Gets, where Crystal Dean is introduced and helps Shane McCallan and the others while they're in Confessions, the strip club where Crystal works. There's an instant albeit tiny connection between Shane and Crystal when they literally bump into each other, but it's more than enough to mark the meeting as memorable. Both Shane's and Crystal's back stories are heartbreaking and once they're revealed, you get a better understanding of what motivates them--Shane in his need to rescue helpless women and Crystal in her need to remain in an abusive relationship. I liked how Shane insisted that he not be told by his teammate what Crystal's real name is because he wanted her to tell him herself, and when she asks him to call her Sara, I couldn't help but smile.

With this second book, readers learn more about the Church gang and the kinds of activities that they're involved in, especially when it comes to the trafficking of women. This is a topic that's handled by the author in a manner that isn't overly graphic but also isn't sugarcoated, making it clear how despicably these women are treated by their captors. Sara is a survivor and doesn't allow herself to be treated as a victim, even though her own sister thinks Sara allows herself to be victimized by the man she's with. Sara has her reasons for remaining in the abusive relationship and when Shane enters her life, you desperately want to push her towards him as quickly as possible so that she can finally be free of the life she's been stuck in for four years. This book certainly lived up to my expectations and I couldn't get enough of the romance and action that was going on. Hard as You Can doesn't disappoint and gets five out of five stars. ♥

Purchase Hard as You Can on Amazon | B&N | Kobo.