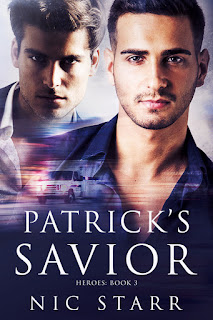 Patrick's Savior is the third and latest release in author Nic Starr's Heroes series, and if you've read the first two books, then elementary school administrative assistant Patrick Edwards and paramedic Simon Dawson should be familiar to you. Even though there's a two-year gap between the second and third books in the series, Patrick and Simon's story does overlap with the events in Charlie's Hero and Andrew's Promise, especially with that glimpse into what awaits them with someone driving a black van eerily keeping watch from a distance mentioned at the end of book two. As is the case with those first two books, you don't necessarily have to read the books in order or at all to be able to fully appreciate this third one, but this is a good series so you may want to check those first two.

When Patrick Edwards faces conflict with his roommate because of the guy's overly familiar boyfriend, the offer of an extra room at Simon Dawson's place is a lifesaver. It helps that Patrick's had a crush on Simon for sometime now, a crush that he has no idea is quite mutual. When they finally confront their feelings for each other, not everything is as great as it should be, not when a stalker appears to have become bolder in his approach towards Patrick. Unsure as to what to do next, Patrick would love nothing more than to lean on the sturdy shoulder that Simon offers him. However, he's also very much aware of what he's brought to Simon's door. Will keeping his distance from Simon be the right move, or will this move prove to be the very thing that could cost Patrick his life?

There's one particular element in this book that isn't present in either of the first two--that of suspense. Figuring out who may be behind the letters and other stalker-like acts isn't too difficult, given that the actions of one supporting character make him the most likely suspect. The romance between Patrick and Simon had a pretty good balance with the darker, more suspenseful part of the book. The climax certainly had tension and apprehension as to how everything will play out and who will make it out on the other side. So far, the author has done a good job mixing things up, giving readers a different flavor with each book. I'm hoping she's got more stories to tell in her Heroes series. Fingers crossed it'll be as good as or even better than its predecessors. Four stars for Patrick's Savior. ♥