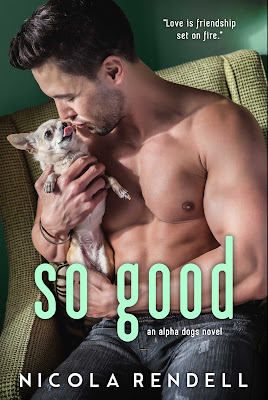 About So Good
On the roof of a house outside Truelove, Maine, master carpenter Max Doyle looks down through a skylight and sees the most beautiful woman he’s ever laid eyes on. She’s naked, she’s gorgeous, and everything about her is perfect, down to the ball-busting tattoo of a rose that wraps around her hip. But it isn’t just any woman making his knees buckle. It’s his best friend, Rosie Madden. And as he stands there, mesmerized and precariously close to toppling off the roof, he knows he’ll never, ever be able to look at her the same way again.

Rosie can’t help but notice that Max is suddenly acting very strange—lots of long stares, totally tongue-tied, and not at all like the slightly cocky hunk she’s proud to call her best friend. She can’t figure it out, until later that night when Max rescues her from the world’s worst date, challenges her to a game of pool, and shows her just exactly what she’s got him thinking about. Repeatedly.

But life is complicated. Rosie’s cat, Julia Caesar, wants to eat Max’s dog Cupcake for an afternoon snack. A dream job threatens to pull them apart. And another glance through the skylight changes everything, one more time. Yet try as they might, they can’t go back to being just friends, because falling in love with the one you’ve always adored?

It feels so good. 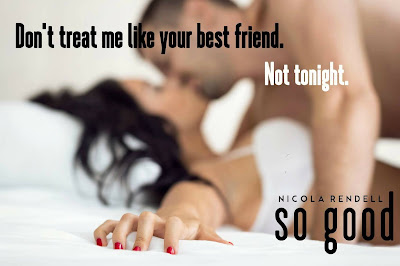 Read my five-plus-starred review of So Good.

Add So Good on Goodreads. 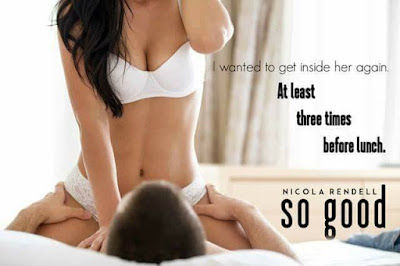 An Excerpt from So Good
I couldn’t do it. I wanted to do it because he kissed with such passion and such aggression that I felt like every single bone in my body was saying, Rosie, this is a table, just lie down and let him have you. But this was Max. My Max. I didn’t kiss Max; I needed Max. But now here I was, liquored up on way-more-than-two margaritas, and losing all my freaking common sense.

Summoning up all my strength, and resisting the gravitational pull of the pool table too, I pushed him away. I turned away and slipped off the rail. I grabbed my purse from the hook underneath the corner pocket and hustled for the door. I could hear Max saying my name, I knew he was trying to make a grab for me, but I had to get out of there. The taste of him had been intoxicating, disorienting.

It had been heaven. And he could not be my heaven.

So without saying goodbye to Fletcher, without even paying my part of our tab, I beat a quick exit for the door, or I tried to anyway. The place was packed, and I had to squirm my way through a whole slew of enormous fishermen, all broad shoulders and barrel chests, like extras from some Viking documentary kicking back after a long day of Hollywood pillage and plunder. Each step was perilous, all their steel-toed boots mere inches from crunching my bare toes. Finally, I did get to the exit and hurled myself out of the door into the dark quiet of the gravel parking lot. Chirping crickets and the buzz of a slowly dying Summer Shandy sign filled the air. The hot air of the bar was swept away by the warm breeze off the water. I inhaled hard, trying to clear my head.

My mind spinning and my feathers decidedly ruffled, I grabbed my keys and tottered to my Bug. But no sooner had I put my key in the lock than the bar door squeaked open and there was Max, coming for me. “No fucking way,” he said, pulling my keys from my hand. “Don’t you dare, Rosie. Don’t you dare.”

It hadn’t even occurred to me what I was doing. I couldn’t drive, for God’s sake. I wasn’t tumble-down drunk, but I was far too tipsy to be going anywhere at all. So I went for Plan B and started to march down the street.

“It’s not that far!” I swatted a huge mosquito that had attached itself to my arm like a jungle dart. “What is it, three miles? Four?” I flapped my hand in the air to say, It’s nothing! But honestly, I don’t think I’d ever walked three miles in my life. I’d have to call a cab. I’d have to hitchhike. Still though, still!

Max grabbed my hand and spun me into him. Our bodies collided, and I became acutely aware of his brawn. “Seven miles. Jesus. Let me take you home at least,” he said, his voice all growly and sexy and…

“It’s Maine, for God’s sake! What’s going to happen? A moose going to mug me?”

“I know what these mosquitos do to you.” He swept his big, rough hand over my bare arm, letting his fingers move lightly along the bend in my elbow.

My breath got caught up in my throat. It was like a hiccup interrupted a cough. For the first time, I understood what it meant to have someone’s touch light you on fire. And not just that either: the kiss was still lingering, the taste of him still on my lips. Sweet and salty. Delicious. He trailed his fingers down the inside of my forearm and back up again. As proof of the fact he’d made alphabet soup of my brain, all I could think to say was, “I don’t know why they never bite you.”

He laughed a little and smiled as he stepped into me. “Because you’re way fucking sweeter.”

So I stepped back again.

He raised his hands up, like a surrender. “Get in my truck. I won’t touch you.” The gravel crunched under his feet as he moved even farther away. He ran his hand through his hair and reached for his keys. “I’ll be good.” 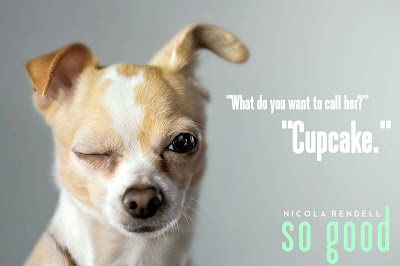 About Nicola Rendell
Nicola Rendell writes dirty romantic comedy. She likes a stiff drink and a well-frosted cake. She loves to cook, sew, and play the piano. She realizes that her hobbies might make her sound like an old lady and she’s totally okay with that. She grew up in Taos, New Mexico; after receiving a handful of degrees from a handful of places, she now works as a professor in New England.

An Amazon bestseller, her work has been featured in USA Today's Happy Ever After and the Huffington Post. She is represented by Emily Sylvan Kim at the Prospect Agency.