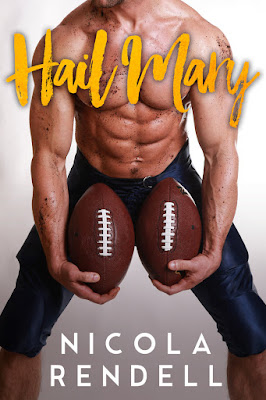 About Hail Mary
At a boxing gym in Chicago, Mary Monahan accidentally knocks out the most handsome man she’s ever met. After she wakes him up with a few slaps and some smelling salts, the very first thing he does is ask her out for ribs and beer. His name is Jimmy. He looks like a Gillette model. And he’s just too hunky to resist.

Jimmy “The Falcon” Falconi is mystified that Mary has absolutely no idea who he is. Mystified and refreshed. He is, after all, not your everyday NFL quarterback. He shops at Costco, has a soft spot for Pinterest, and is in the midst of an epic losing streak.

Jimmy falls for Mary fast and hard, the way he does everything—balls out and like it’s fourth and long. And he realizes he’s finally met his match. That stamina he’s so proud of? Doesn’t stand a chance against her Kegels.

But what they don’t know is she’s also his new physical therapist, recently hired by the Bears to work on his rotator cuff…and groin injury. If she can’t help him, he’ll be traded faster than they can say “offensive penetration.”

In spite of the thousands of internet memes featuring Jimmy’s face with captions like: “HEY GIRL, WANT TO TOUCH MY BALLS?” Mary finds herself falling for him and his unrelenting desire to make her his.

Until a toddler shows up at Jimmy’s door.

And throws their lives into total chaos. 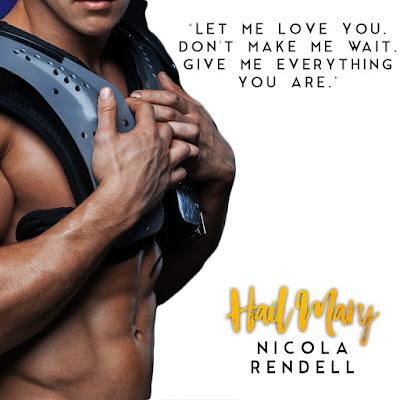 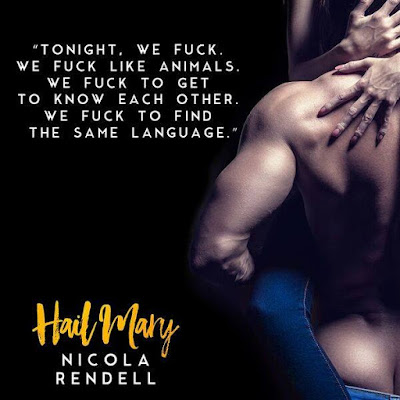 An Excerpt from Hail Mary
“Holy shit.” Jimmy reaches out and unpinches his fingers over Frankie’s face. “That looks like an ewok.” He leans in, putting his enormous elbows on the table so that everything on it sloshes and slides like we’re at sea. I clamp my hand to my side of the table and try to right the vessel with my shoe. Victory. Not even a drop of beer lost.

“Frankie Knuckles is his name.”

“Jesus,” he says with a snort, looking at the picture. “What a bruiser.”

Not exactly. He’s 13 pounds, allergic to wheat, afraid of aluminum foil, and carries a half-stuffed drool-crusted panda bear around with him everywhere he goes.

“Do you like dogs?” I ask, as casually as I can muster.

In my head, I swear to God, I hear the theme song from Jeopardy. This is a moment of truth. I’m not sure I’ll ever see this guy again, but I’d like to. I’m not sure I’ll ever know his lips on mine, but I want to. But this question, the dog question, this could be a deal-breaker. I find non-dog lovers to be very, very suspicious. I once heard Ted Bundy disliked dogs, and I thought, Of course he did. But this guy, Jimmy, he’s so perfect that we’ve got to be headed for a catastrophe. This might be it. Just my luck he’s going to say, I’m allergic, or I have twenty-nine cats, or I’m really into snakes.

And the crowd goes wild!

“Me too,” I say, smiling. It’s an understatement, but I don’t want to get pegged as crazy dog lady quite yet. With a non-greasy finger, I type in my passcode. “He’s a Brussels Griffon. And everybody says he looks like an ewok, but I’ve never actually seen Star Wars, so I can’t weigh in on that.

”He scratches his head and glances at the bar. “Never?”

He clears his throat. “I mean, I don’t want to be rude, but do you live under some kind of rock? Are you a hermit? Because I could totally be into that, but you know, full disclosure…”

Oh Lord. I could be into that. I swallow hard. Wait. What was the rest of that sentence? Right. Star Wars. “I just never saw it growing up, and now it’s sort of a thing. I’m not morally opposed to Darth Vader or anything. Just…never got around to it.”

Jimmy shrugs his massive sexy shoulders. He’s in a navy-blue thermal Henley and a gray Bears hoodie zipped halfway up. I’m pretty sure I can smell Bounce fabric softener tangled up with the Ivory soap smell. It’s hard to tell through the hickory smoke. It’ll require further up-close investigation. I’m definitely on board with that.

“Fair enough,” he says. “I guess it’s possible to not have seen Star Wars. Maybe? Did you grow up in Amish country?”

My giggle comes right from the depths of my stomach. “I grew up mostly in Vermont. My aunt was an apiarist.”

I feel like a jerk immediately. He probably thinks I’m quizzing him on his vocabulary…“

And the crowd goes wild again! “

So many bees. We didn’t have cable, but I can talk your ear off about honey.” He slides his lower jaw off to one side and looks me up and down. “Honey, huh?”

I snatch up my beer and take a gulp. He grins. “It’s okay. I see your lack of Star Wars and I’ll raise you. I’ve never seen The Princess Bride.”

“Well, that’s ridiculous. Even we had that one on VHS. Auntie Cheryl said it was a feminist film. She feels like Buttercup was inspired by Gertrude Stein.”

He snickers into his beer. Did he just laugh at a second-wave feminist reference? I might love him already.

About Nicola Rendell
Nicola Rendell writes dirty romantic comedy. She likes a stiff drink and a well-frosted cake. She loves to cook, sew, and play the piano. She realizes that her hobbies might make her sound like an old lady and she’s totally okay with that. She grew up in Taos, New Mexico; after receiving a handful of degrees from a handful of places, she now works as a professor in New England.

An Amazon bestseller, her work has been featured in USA Today's Happy Ever After and the Huffington Post. She is represented by Emily Sylvan Kim at the Prospect Agency.