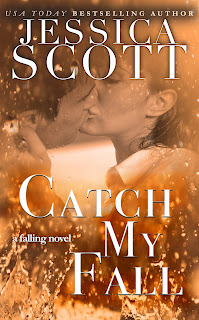 Just take my heart already, Jessica Scott! Well, at least the pieces of my heart that broke off while reading the fourth novel in Scott's Falling series. This was a second chance romance that had a great deal of hesitance and heartbreak in it before the main couple found and fought their way to a much deserved happily-ever-after. Deacon Hunter and Kelsey Ryder are veterans of a war that doesn't make as much sense as it may have once did when they were young cadets. They're both former sergeants who may have left the Army behind, but their memories are still with them--the good, the bad, and the ugly. A lot of those memories are shared, and then they went their separate ways. Deacon thought picking up where they left off would be inevitable, but Kelsey needs to keep her distance from her ex, because while she misses his touch and affection and wonders about the possibilities they could be exploring together, Deacon represents everything that she no longer wants anything to do with it--her time in uniform. Can he convince her to trust in what they could have and that he'll be there to catch her when she falls?

Catch My Fall may share one particular theme with the rest of the novels in the series--life post-military service--but just its predecessors, this latest release can be read as a standalone. However, I'm going to highly recommend that you read the books in order so as to have a more complete reading experience. After all, the main characters in books past recur, some in a peripheral manner and not merely as support or for a cameo. But if you've never read anything by Jessica Scott before, feel free to jump in feet (and heart) first with this one, especially if you're as big of an angst addict as I am. There's never anything light and breezy when it comes to this military romance series of Scott's, and if that's what you're after, I suggest you look elsewhere. If you aren't afraid of heavier reads, especially those that are remarkably well-written, then venture forth with a Scott read. Her personal military experience shines through yet again with this one, and when I say there's a finely tuned balance between the military aspect and that of the romance, I'm not kidding. There is no false advertising with this military romance.

Speaking of the military, the author touched upon important issues that both the institution and those who were and are part of it currently face, particularly when it comes to the assistance (or lack thereof) that a veteran receives once they return from service. I've read and heard too many stories, both in mainstream and social media, of how veterans are overlooked and it truly is heartbreaking. I don't think it would be too much to ask to repay the service that was offered by these men and women with what they were promised to begin with. Sadly, red tape isn't something that can easily be stripped off, and the truth of the matter is war is often politicized and those who were at the front lines are those who end up being forgotten when everything is over and done with. I applaud Jessica Scott for weaving the realities that military veterans face and the need for a love story that readers can sink their proverbial teeth into. She doesn't underestimate what her readers can handle. She gives it to you with both hope and honesty and you can't help but go all in with her characters and story. I'm giving Catch My Fall five stars. ♥