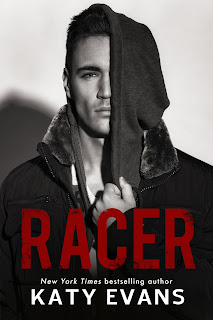 So, yeah, you could say I'm relentless. You could say I'm the sort of guy who knows what he wants and isn't afraid of anything, not the law, or the rules. I'm my father's son. I like to go for what I want. Chase my ambitions.

I want this girl beneath me and that's that.

I'm Racer Tate and this girl is mine.


If many expected Remy Tate's son to follow in his footsteps--footsteps that should have led straight into the octagon--then they had another thing coming. The same competitiveness in the father flowed through the son's veins, but Racer Tate preferred the streets and roads to get his blood pumping. Only twenty-two, he's already got one hell of a reputation as the top driver in illegal racing. It's that very reputation that's led twenty-two-year-old Lana Heyworth to head from Australia to St. Petersburg, Florida. She may be the only female in the family-owned and -staffed HW Racing Team, but she's willing to do anything and everything to make sure her beloved father's dream of having a championship team in F1 Racing remains on track. There's no denying just how impressive Racer's driving skills are. Lana wants him for her family's team, and Racer wants her for himself. Street racing and professional racing are two different things, but Racer's confident he's exactly who Lana needs--on the race track and off it. Racer already knows Lana is "the one", but will she still want to be his once he tells her his dark secret?

I liked Remy Tate, but I LOVED Racer Tate. He's definitely grown up, and while there are things about him that remind me of his father, he's his own man. He's got his own personality quirks that make him a completely separate entity worth getting to know. He's cocky but kindhearted. He knows exactly how good he is at what he does and he knows how privileged he is, but while he has no qualms brandishing his confidence, he doesn't flaunt the fact that he and his family have more than average folks. When Lana literally crashed into his life, he simply knew she was it, and I loved how dogged he was about pursuing her yet wasn't a complete jackass about it. Surprisingly enough, theirs was a slow burn romance. Oh, it was obvious they wanted each other, but even though I'm sure Racer wished things had sped up a bit more between them, I liked that they got to know one another better before finally getting together, meaning readers got to know them better as well. They bantered and flirted and pushed and pulled, and it all made for such a fun and entertaining romance rather than the usual humdrum.

This is a spin-off standalone novel, and indeed, you CAN read Racer without reading any of the other books in the Real series. However, I hope that you do read the others, or at the very least, the first three books which are about Racer's parents, Remington Tate and Brooke Dumas. I feel it'll give readers a better appreciation for Racer's personal history, especially since Remy and Brooke had their own share of battles and challenges before getting their happily-ever-after. Racer's also got a younger sister, Iris, and I'm not sure if Katy Evans has plans for writing a book for her, but I hope we get one down the line. But I digress! I've enjoyed the series as a whole--although I did skip the fifth novel--but Racer is special. It's a story about overcoming personal and professional hurdles and it's also about family and just how much we're willing to do for family. You pretty much know that Racer and Lana were going to get a happy ending, and the journey to it certainly wasn't easy, but it made for such a lovely read, one that I would probably consider among my top three Katy Evans reads. Racer is a 2017 favorite. Five-plus stars. ♥

Read my reviews for the Real series: