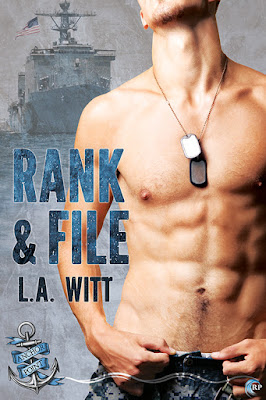 About Rank & File
Senior Chief Will Curtis is as straitlaced as they come. While his fellow Sailors have partied their way through their enlistments, he’s had his eye on the prize—making master chief and retiring after thirty years of service.

Lieutenant Brent Jameson is a Navy brat turned Annapolis grad. He’s lived and breathed the military his whole life, and he knows he’s destined for great things—once he’s done paying his dues at the bottom of the ladder.

When their paths cross, both men know better than to give in to temptation, but that doesn’t stop them. It also doesn’t keep them from coming back for more, even though being discovered would sink their careers. Something has to give—Will can retire, Brent can resign, or they’ll both face court-martial.

But there’s also the option neither wants to acknowledge: jump ship and walk away from each other instead of ending their careers over a fledgling relationship. And they should probably decide before they fall in love.

An Excerpt from Rank & File

What the hell am I doing?

I looked around the club. Most of the guys here in the High-&-Tight were years younger than me. The music was geared toward their generation, not mine, though it was catchy. The beers were all right even if I hadn’t heard of most of them. It wasn’t a bad place by any means, but I wasn’t sure if coming here was such a good idea. My best friend, Noah, had sworn by this club. Anchor Point finally had a gay bar, and according to him, it was a damn good one. So if there was a place to get laid in this town, the High-&-Tight was it.

Being close to the base, and with a name like that, it was no surprise the place was crawling with military. First termers, mostly—guys who probably hadn’t been able to legally drink for more than a few months. Guys I had no business touching.

Christ. I didn’t know what I expected to find here. Someone barely over half my age who was game for a hookup in the men’s room, maybe. Younger guys weren’t exactly my thing, but I didn’t see many alternatives in this club. And the high-and-tight haircuts at least let me know who to stay away from. I didn’t relish the idea of being called into Captain Rodriguez’s office to explain why someone had a photo of me making out with some E-3 I hadn’t recognized out of uniform.

I played with the label on my beer bottle. Ultimately, I wasn’t here because the men in this crowd were what I was craving tonight. They were a distraction from what I hadn’t been able to get off my mind for the last several nights. I’d given up on fooling myself into believing I could get Lieutenant Jameson out of my system if I thought about him with my hand on my cock enough times.

I took a deep pull from my beer and rolled the ice-cold liquid around in my mouth until my teeth ached.

What the fuck is wrong with me? Why am I so depressed tonight?

It was probably because just this week, I’d agreed to help Noah’s boyfriend move in with him when they finally had all the logistics sorted out. There was nothing I wouldn’t do for Noah—and by extension his boyfriend—but I wasn’t looking forward to helping them unload that U-Haul. It’d be like a reverse of what Noah had helped me do earlier this year, when we’d been taking boxes out of my house and putting them into a truck. His boyfriend was coming to live in Anchor Point. Mine had been getting the hell out of town with someone younger and more limber.

Fuck. Even now, the better part of a year later, something came along every so often and reminded me that Vince was gone. I was over him, and wouldn’t take him back if he were the last man on earth, but after six years together, it had taken time to get used to being Will, and not one half of Will and Vince.

So that was it. I’d been raw after agreeing to help Anthony move because apparently I was more of a wreck than I’d realized, and I’d zeroed in on an attractive man. He’d been a distraction from my ex, and from how wound up I always was when I had to respond to a domestic, so I’d run with it. I’d let myself memorize him. I’d ogled a half-naked man with just enough bedhead to make my mouth water, let myself wish I could be the one messing up his hair, wondered if he liked it pulled, or if—

Stop it. You’re going to make yourself crazy.

Yeah, he’d had messy hair after getting out of bed with a woman. The guy was straight. End of story. That long look before he’d gotten out of my truck? My imagination. The way he’d kept watching me while I drove—which I’d noticed because the rearview had been tilted to let me steal glances at him—had also been my imagination.

He was gone, and even if he wasn’t, he was out of my league, so I needed to get over my ridiculous fantasies and find a guy who actually played for my team. I could either spend the night hunched over the bar and staring into my beer, or I could pull my head out of my ass and start looking for someone to distract me for a while.

So, I turned around, leaned against the bar, and—

You have got to be kidding me.

If I’d thought Brent was gorgeous in a pair of jeans and nothing else with sex-ruffled hair . . . Okay, I stood by that, but Christ, tonight he was really abusing the privilege of being sexy. His tight jeans clung to his ass, and something about the way the black belt sat made my skin tingle. He had on an unbuttoned black shirt, and under that a skintight white tee. And instead of his hair being disheveled from sex, or hastily finger-combed into place, it was meticulously styled now. Like a lot of officers, he didn’t cut his hair as severely as enlisted guys often did, and he had enough length on top to style it and give it that “neatly messy” look.

Learn more about the Anchor Point series on Riptide Publishing.

Giveaway
To celebrate the release of Rank & File, one lucky winner will receive their choice of two eBooks off L.A. Witt’s backlist (excluding Rank & File) and a $10 Riptide Publishing store credit! Leave a comment with your contact info to enter the contest. Entries close at midnight, Eastern time, on September 30, 2017. Contest is NOT restricted to U.S. entries. Thanks for following the tour, and don’t forget to leave your contact info!