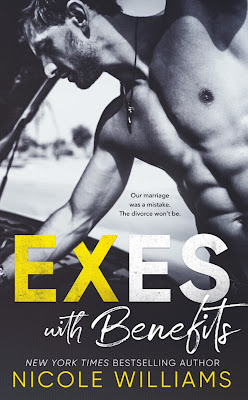 About Exes with Benefits
He wants a second chance. I want a divorce. To get what I want, I’ll have to give him what he does.

The only benefit I want from my ex is a divorce.

We got married for all the wrong reasons. The one thing we got right was our separation. I should have known better than to think I could bet on forever with a guy like Canaan Ford. Everything about him screamed impermanent, from his wild eyes to his restless soul.

When I left him and the small town I’d spent my whole life in, I swore I’d never go back. Never only turned out to be five years. Canaan claims he’s changed, but he hasn’t—same knowing smile, same rough demeanor, same body crafted from sin and sinew. And yet, something is different. He thinks this is his chance for redemption. My disagreement comes in the form of divorce papers dropped in his lap. He refuses to sign them. Unless . . .

He wants a month to prove himself to me—that’s his offer. One month to make me fall in love with him again and if I don’t, he’ll sign the papers. As much as I want to say no, I agree. I can suffer my ex for a short amount of time if that’s what it takes to be free of him once and for all. I fell for him once; I won’t make that same mistake twice.

He says we’re not over. I say we were over before we got started. Only one of us can be right, and I can’t let it be him. 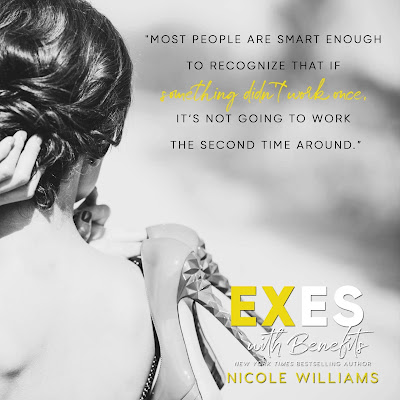 Add Exes with Benefits on Goodreads. 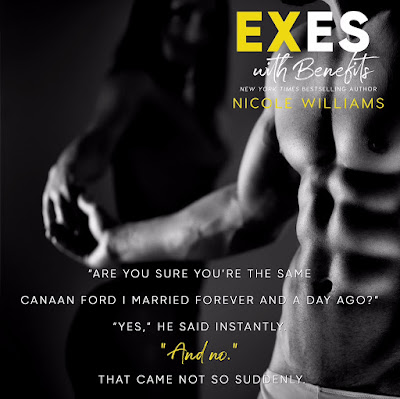 An Excerpt from Exes with Benefits
“Canaan—”

Before I could attempt to figure out how to follow that, he lifted his hands. “I’m here to help. That’s all. No hidden agenda. I swear,” he added when I eyed the stack of packing supplies like there was a secret code I was meant to decipher.

“I don’t want to fight. Or argue. Or debate. Or anything else you and I could never stop going on and on about.”

“I don’t either.” He kept his hands raised for another moment before dropping them at his sides. “We didn’t always used to be like that, you know?”

“I remember. And then we turned thirteen and hormones got the better of us and we couldn’t seem to stop fighting.”

“I remember times we weren’t fighting. Lots of times.”

“The only times we weren’t fighting was when we were making out or making something.” I closed the door and cleared my throat.

“Fighting and fucking. We were damn great at both.”

If it wasn’t for the boyish grin he gave me right then, he would have gotten more than a grumble from me.

“We should have just stayed friends. That was the only relationship we were good at.”

“We never could have just stayed friends.”

“Why not?” I glanced around for a sweater to throw on, since that was the second time he’d looked at me like he had to convince himself not to misbehave.

“Chemistry. You and I had it.” He started folding the first box, his hands working with all of his attention directed at me. “You and I still have it.”

The warm jolt that shot through my veins whenever he came close confirmed his theory. However . . .

“You need a lot more than chemistry to make a marriage work. To make any relationship work.”

His shoulder lifted as he taped the box. “Of course you do. But a hell of a lot of chemistry sure doesn’t go bad with all of that other love, trust, and respect stuff. Does it?”

Grabbing a box, I put a good distance between us before starting to make it. “I wouldn’t know.”

Canaan stopped in the middle of yanking a strip of tape. “I felt like we had those things. Maybe not in the amount we should have, but I always loved and trusted you. And I respected the shit out of you too.”

I thought back to all of those nights I stayed awake, waiting for him to come home. My hand cupped around my telephone, whispering silent prayers to whatever god was listening at the time. I thought about the empty bottles and mornings of him not being able to recall anything of the night before. The scents of other women on him. I remembered tending to wounds and mending injuries.

Although the real ones that needed fixed I was never able to heal.

My eyes met his and lingered there. “You had a funny way of showing it.”

His mouth opened instantly, but it closed just as fast. He took a full breath. “I know.” 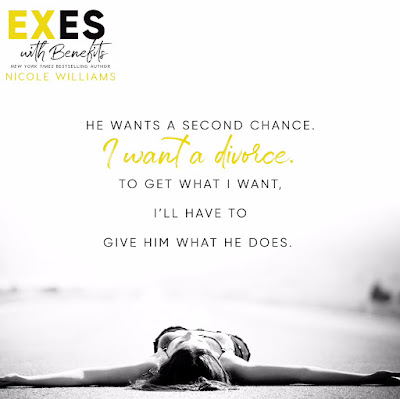 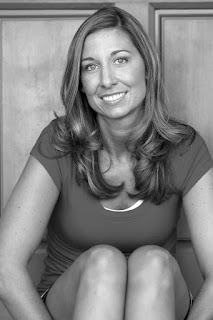 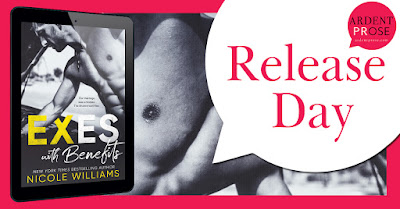