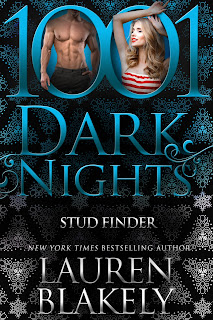 “I didn’t expect to want this or you. But I do. I want you so much. I want to be the one you choose.”

I shake my head, amused that she’d think there’s any choice for me but her. I bring my forehead to hers and say what I didn’t say last night. “You’re who I want.”

You know how there are books that go on for far longer than they should--leading to boredom--and you know how there are books that are way too short--leading to frustration? I'm going full-on Goldilocks because Lauren Blakely's new novella, which ties in her highly popular and bestselling--and a personal favorite of mine!--Big Rock series and The Knocked Up Plan, was neither too long nor too short. It as just right, giving me everything I could have wanted in a romance without going overboard or leaving me wanting either. While Stud Finder has ties to other titles, that doesn't mean, that you need to read all those books before reading this brand new standalone, although, if we're being absolutely honest here, you'd be nuts NOT to read them. They're romantic comedy gems that had me laughing and snickering while falling in love with the characters and the stories they share with us. There are also recurring characters, and trust me when I tell you that you'll want to get to know them if you haven't gotten around to yet. But do NOT let me stop you from feel free to peruse this novella as soon as possible!

Stud Finder re-introduces readers to Dylan Parker, who was part of The Knocked Up Plan as a minor character, who happens to be a very wealthy and unrepentant nerd looking for the woman he wants to spend the rest of his life with. He's made a name for himself and more money than he has time to count through technology, so why shouldn't he entrust finding the perfect woman through the internet? Right? The perfect personal ad should do the trick...except...it lures those who are clearly more interested in how much he's worth than discover his true worth. His sister comes to his rescue by asking the very person who helped her get her own happily-ever-after--Evie Milligan, aka the Stud Finder. While her clients have been exclusively women, she's more than willing to make an exception for Dylan. He's hot, funny, smart, and a genuinely nice guy. Who wouldn't want to be his studette? Well, not Evie, of course. Because there's no way this matchmaker could ever allow herself to fall for a client. Even if she is doing it pro bono because she's friends with his sister. Yeah. Not falling for him will be easy-peasy... Right?

Dylan and Evie were such an adorable pair, and you could tell from the get-go that these two had more in common than they initially realized. Pretty soon, it was obvious that they were perfect for each other, but it would be wrong for Evie to fall for her own client, or so she believes. Of course, there is such a thing as being ethical about having a personal relationship with someone you're tied to professionally. However, love knows no bounds, and Dylan and Evie simply had to figure out that what they were feeling went beyond the platonic and that Evie had already found the perfect match for Dylan--HER! Easier said than done, but getting to those realizations is what made this book a fun and entertaining read. There's a bit of prodding on the part of some characters, and while I know Dylan's close friend, Mia Summers, and Evie's brother, Patrick Milligan, get their story in Hard Wood, I'm hoping Flynn, Dylan's twin and Ryder Lockhart's best friend in The Knocked Up Plan, also gets his story told. Demanding much? More of wishing and hoping because I can't get enough of Lauren Blakely's characters! Gah! Five-plus stars! ♥