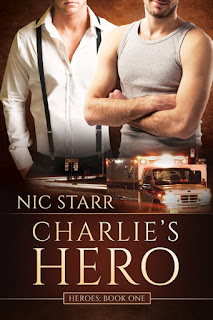 I love discovering a new series that I can sink my proverbial teeth into! Nic Starr's Heroes is one such series, starting off with Charlie's Hero, which not only gives us the romance between paramedic Josh Campbell and elementary school teacher Charlie Matthews but also introduces readers to a number of peripheral characters whose own romances will play out as the series progresses. This wasn't my first Nic Starr read, having already read her Rustic series last year and her World of Love novella, Runaway, so I already know what to expect in terms of quality of writing. Fortunately, she met said expectation, and I got my first taste of what the town of Halls Ridge  and a few select residents had to offer, and it was enough of a taste that had me back for a second and third time.

When second grade teacher Charlie Matthews first sees paramedic Josh Campbell tending to one of his students who had a playground accident, he's immediately smitten with the twenty-six-year-old. Both men eagerly explore the connection that they have, but Josh's sexuality is one that he's kept secret from the person who matters most to him--his older brother Andrew. Charlie knows what it's like to be rejected by one's own family simply because he happened to be gay, so he can appreciate why Josh is hesitant to be open and honest with the man who brought him up after the death of their father. But as strong as Charlie's feelings are for Josh--feelings he believes Josh reciprocates--he's unsure how long can keep holding out for his hero. Can they conquer their fears together?

Charlie is out, and so is Josh...to a degree. Charlie has experienced the worst kind of rejection firsthand, and Josh fears the same kind. But at the crux of Josh's dilemma is a simple matter of a lack of communication. Of course, hindsight is twenty-twenty, and it's easy to say that two people should speak and listen, but things are more complicated when you're a teenager and fear gets a hold of you first. There are resolutions in this story, especially when it comes to the family conflict that Charlie and Josh faced, and I appreciated that the author didn't go for the sappy, story book kind of resolution. What happened here felt more real and honest but still ended happily. I also liked that there's a peek as to where book two is headed to because Charlie's Hero made me want more. 4.5 stars. ♥