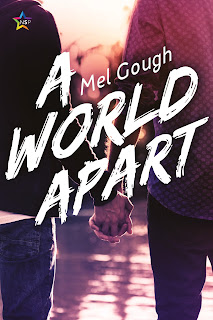 Note: This ARC was provided by the publisher via Signal Boost Promotions.

A World Apart is an M/M contemporary romance with a heavy dose of angst and was written by debut author Mel Gough. When Ben Grier meets Donnie Saunders, it's as police sergeant and suspect, respectively. Ben steps in when his far more hotheaded best friend and partner seems to intent on pinning a hit-and-run on Donnie, barely putting any effort in an interrogation. When they meet again, it's at an Alcoholics Anonymous meeting, and Donnie makes it known just how much he appreciated the kindness Ben showed him at the Corinth, Georgia PD precinct. Thus begins an unexpected kinship between these two men, with Ben needing something to buoy his spirits after his wife lets him know she intends to file for divorce, leaving Ben fearful she'll take their daughter away, and with Donnie needing a touchstone, what with his older brother continuing to be an abuser in more ways than one, and with certain health issues that he isn't all that forthcoming with as of yet. With their respective lives facing changes and challenges, can two men intimately drawn to each other find a way to bridge their two very different worlds?

First things first: I applaud the author for tackling such a heavy subject matter such as substance abuse, addiction, and particular health issues that I won't get into in this review for the sake of keeping this spoiler-free. This novel is NOT a light read and if you do decide to read it, be aware that there are moments in which the scenes are graphically described, which I quite appreciated because they were realistic. This is one of those stories that would not have benefited had Gough decided to go in a different direction and sugarcoated it. Another thing that I appreciated was the fact the Ben's bisexuality wasn't some angle that involved him having to choose if he was going to be gay or straight. He's bisexual. It's not as if he has some sort of switch that he can forcibly turn on and off whenever the heck he feels like it. Thank goodness his sexuality wasn't an issue because I've read too many books where it was at the very crux of the story and Gough's debut effort made for a refreshing change. Heck, the reaction of Ben's teenage daughter put a smile on my face because bisexuality isn't so shocking or something new.

Now, on to the stuff that had me rolling back on my rating for this book. Maybe it didn't bother a lot of people, but the missing article (i.e. "a" or "the") before "meeting" bugged me. "Come to meeting again," "I went to meeting," "I'm going back to the daycare Monday. Come to meeting?", "Wish I could go to meeting," "We're going to meeting," and "...but just like the first time Ben had heard him in meeting..." were the six times I noted the missing article. This was an advanced reader copy, so I'm going to hope that this was corrected prior to final publication. Then there was the overuse of the supposed endearment of "buddy". I lost track after hitting fifty. I'm sorry, but "buddy" isn't sweet or romantic. I'm guessing these guys were either in their mid- to late thirties or early forties, based on Ben having a teenager prepping for college and Donnie's older brother being in his late forties. It made me wish their ages were specified because there were times Donnie came off as younger than he probably was, and the whole "buddy" thing didn't help. Weighing the good with the not-so-good, A World Apart gets four stars. ♥