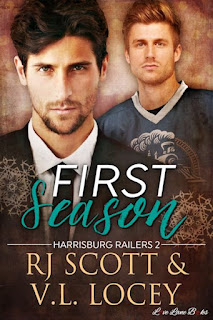 The writing duo of RJ Scott and V.L. Locey are back with their second installment in their ongoing Harrisburg Railers hockey romance series. Twenty-five-year-old Layton Foxx and twenty-four-year-old Adler Lockhart, the new meia liaison and the new left wing for the Harrisburg Railers, respectively, were briefly introduced in the series starter, Changing Lines, and with First Season, we get their story, one that's about taking chances and moving beyond your past in order to find your own happiness. It's also about what it means to be family and to be part of a team. While the first book was an okay enough read, the second one definitely leveled things up, making for a much more cohesive and enjoyable reading experience on my end and me excited for the third novel in this promising series.

Layton Foxx knows that his handling of the coming out of a star player and the coach for the Harrisburg Railers could be the ultimate make or break for his career. He needs to make sure that the rest of the team won't bring any sort of negative attention to the issue or have to be saddled with their own bad press. The last thing Layton needs is to be distracted by Adler Lockhart, but the winger for the team isn't making it easy for Layton to push him aside. There's something about Ad that both frustrates and intrigues Layton, and it's not as if the attraction is one-sided. However, now isn't the time to pursue anything. Maybe there will never be a good time to do so, not with Layton's past still haunting him. It'll take some coaxing and caring, but Adler is in this with Layton for the long haul.

I adored Adler! Yes, the guy needed a filter from time to time, but he was so refreshingly honest about what he thought and felt, making him the perfect counterpoint to someone like Layton, who was far more buttoned up and controlled. I empathized with Layton, especially when the reason behind his reticence was made known. How Adler handled everything after that made me like the guy even more, especially since this gave him his own opportunity to do a bit of growing up and learning a few things as well. We also see how Tennant Rowe and James Madsen's own relationship has progressed and who's up next in the series. The Harrisburg Railers series may not have gotten off to a roaring start for me, but it's undoubtedly bounced back with First Season, which gets 4.5 stars. ♥

Read my reviews for the Harrisburg Railers series: