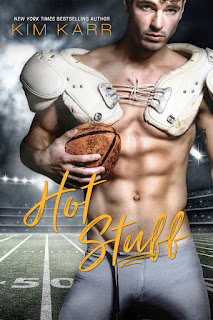 I love when an author writes a sports romance and doesn't skimp on the sports part of the equation. Kim Karr's latest addition to her Sexy Jerk series of standalones is her best one yet, and Hot Stuff is, indeed, hot but it's also got heart and both lighthearted and angst-filled moments. The player-falling-for-the-coach's-daughter story line is a familiar one, but Karr doesn't give readers a recycles plot or characters, making for an overall entertaining read.

Pundits knew college quarterback standout Lucas Carrington was going to be drafted by New England and that was exactly what Lucas wanted. All it took was one player getting sacked and one phone call that would change the trajectory of his yet-to-be started professional football career. Instead of New England, Lucas finds himself in the last place he wanted to end up at--his hometown of Chicago. He is NOT happy and everyone on the team knows it.

When Lucas and Gillian crash into each other during training camp, it's the beginning of a kinship that soon gives way to more. Gillian is Coach Whitney's daughter and Lucas knows that means only one thing: hands off. Lucas and Gillian are quickly falling for each other, but will she become too much of a distraction, especially since he's still proving himself worthy of a signed contract? Football has always come first for Lucas but has Gillian changed that?

Secrets always have a way of coming out and in the case of Lucas and Gillian, my heart broke for the two of them when their secret relationship was discovered, especially the aftermath. These two twenty-three-year-olds had their missteps and there was a time or two were they made certain choices based on what they felt was best for the other person, but there was a genuineness to their personalities that I really liked and made them endearing.

One of my favorite things about this book was that ending because it called to my romance reader's heart and left me with a silly grin on my face. As always, Kim Karr keeps things on an even keel, making it way too easy for me to sit back and enjoy the ride with Lucas and Gillian and the rest of this fictional Chicago Bears organization. Karr is easily becoming a go-to author and I look forward to reading whatever she has up next. Hot Stuff receives 4.5 stars. ♥

Read my reviews for the Sexy World series: