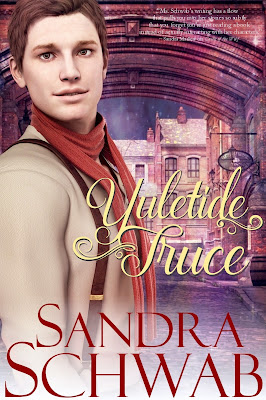 It's December, Alan "Aigee" Garmond's favorite time of the year, when the window display of the small bookshop where he works fills up with crimson Christmas books and sprays of holly. Everything could be perfect—if it weren't for handsome Christopher Foreman, the brilliant writer for the fashionable magazine About Town, who has taken an inexplicable and public dislike to Aigee's book reviews.

But why would a man such as Foreman choose to target reviews published in a small bookshop's magazine? Aigee is determined to find out. And not, he tells himself, just because he finds Foreman so intriguing.

Aigee’s quest leads him from smoke-filled ale-houses into the dark, dingy alleys of one of London's most notorious rookeries. And then, finally, to Foreman. Will Aigee be able to wrangle a Yuletide truce from his nemesis?

An Excerpt from Yuletide Truce
Foreman brushed a hand through his hair. “Does that mean I can no longer sharpen my pen on your reviews?”

Aigee’s lips twitched. Suddenly, he felt quite lighthearted, almost daring. As if anything might be possible.

As if this little room had been touched by some Christmas magic.

As if he might take the boldest chance of all…

“Oh, I’m sure you’ll have no difficulties in finding something else for sharpening your pen,” he said. “After all, the lashings of your pen and tongue are renowned.”

Foreman snorted. “It’s hardly my fault that people insist on being ludicrous."

Aigee looked out of the window at the darkness that was only broken by the feeble glow of the a few lamps in the windows of the houses around this little yard. “Hm…” For a moment, he still hesitated. Then: “Did you also give a tongue-lashing to that fellow I saw you leading up the stairs at the Little Rose?” He turned, wondering if he had overshot his mark.

Rather pale, Foreman stared at him, which made Aigee realize that his remark could be misconstrued.

“I was rather jealous of the man,” he clarified.

Color came and went in Foreman’s face. With narrowed eyes, he looked Aigee up and down. “I see,” he said, nastily. “And you expect me to give you the same in gratitude for services rendered, is that it?”

Aigee felt a stab of exasperation as he shook his head. “What a nasty mind you have, Mr. Foreman.” He walked over to the bed, sat down, and boxed Foreman in with one arm, forcing him to fall back against the pillows as he leaned over him. “Actually, I was thinking more of giving you a tongue-lashing for being so stupid as to enter a well-known rookery all by yourself.”

They stared at each other. 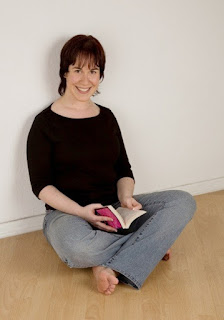 Award-winning author Sandra Schwab started writing her first novel when she was seven years old. Thirty-odd years later, telling stories is still her greatest passion, even though by now, she has exchanged her pink fountain pen of old for a black computer keyboard. Since the release of her debut novel in 2005, she has enchanted readers worldwide with her unusual historical romances (some of which she now uses to shamelessly fangirl over Punch, her favorite Victorian magazine).

She holds a PhD in English literature, and in autumn 2015, she appeared on the BBC documentary Great Continental Railway Journeys to talk about another favorite topic of hers, the Grimms’ fairy tales (while walking through a rather muddy stretch of the Black Forest) (there were a lot of slugs, too).

She lives in Frankfurt am Main / Germany with a sketchbook, a sewing machine, and an ever-expanding library.