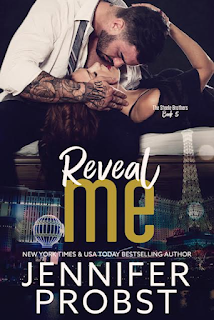 Surprise! There's a fifth book in the Steele Brothers series penned by bestselling author Jennifer Probst AND it happens to be interconnected with Theirs to Take, the latest release in bestselling author Laura Kaye's Blasphemy series. For the record, you don't need to read the first four books in the Steele Brothers collection nor do you need to read Theirs to Take. However, if you want to experience the world of Fanta-C and Blasphemy, respectively, feel free to dive in. I've read the original four Steele Brothers stories as well as the Blasphemy books by Laura Kaye, and I enjoyed both series. If you like a side of kink with your romance, then look no further than these two collections.

Reveal Me is the story of Leonardo Sinclair, cousin to Rick, Roman, Rafe, and Remington Steele (from the Steele Brothers series) and close friend of and Navy brothers with Jonathan Allen and Cruz Ramos (from Theirs to Take). He's a Dominant who accepts the invitation of his friends who happen to be co-owners of an exclusive club that caters to those who indulge in the BDSM lifestyle. It's at Blasphemy where Leo meets Scarlett Rose, a divorcee looking for a Dom who can finally fulfill her needs and wants. They know that there time at the club is limited, especially with both of them starting the next chapter of their respective lives. But what happens when the connection between them is undeniable? Do they run from this revelation or do they embrace what it has to offer?

Leo and Scarlett's love story was one that held a couple of surprises, which I appreciated. The conflict may have been a frustrating one, but it was one that worked perfectly well with the story as a whole. After all, having these two get from their first time together as temporary Dom and subbie to something more permanently immediately would have smacked of unrealistic. I really liked the chemistry between them, and there was a push and pull that I made them more interesting as a couple. Having the characters from Theirs to Take as well as those from the first four Steele Brothers stories gave it an additional fun element. The one thing I found weird was Leo's explanation regarding Rafe's name. He said it was because of Rafael Nadal, but Rafa is only thirty-one and turned pro in 2001, making it improbable that he was well-known enough to have inspired Rafe's name. Other than that, I enjoyed Reveal Me and give kudos to Jennifer Probst for weaving together the worlds of Fanta-C and Blasphemy. 4.5 stars. ♥

Purchase Reveal Me on Amazon.