Review: Ties That Bind by Katee Robert (Hot in Hollywood #1) 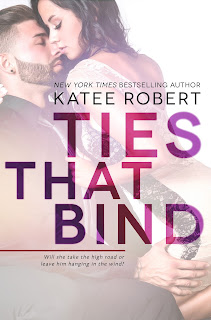 Ties That Bind is the first book in the new Hot in Hollywood duet from bestselling author Katee Robert. This was a second-chance romance between former child and teen actress turned divorce lawyer Cora Landers and former actor turned director Jack McArthur. When Cora was eighteen, she had already been in the business for several years, paving the way to her being labeled America's Sweetheart. But all of that went away when a sex tape of hers was made viral. While Jack, her twenty-one-year-old partner, went on to have his career skyrocket, Cora's ended soon after. Neither Cora nor Jack have seen one another in the twelve years since everything exploded for him and imploded for her, but when Jack wakes up realizing that he's married but has no recollection of how it all went down, he knows the only person he can reach out to is the woman he's never forgotten--Cora. Now a successful divorce lawyer, Cora knows that she can provide Jack with exactly what he needs, but will she be able to stop herself from giving the man who changed her life a dozen years ago what he wants now--a chance to be together?

I went into this book thinking one thing and was more than pleasantly surprised by how the story played out. Cora's and Jack's lives changed forever when their sex tape was released. After all, she was the actress that everyone was waiting to become legal--the virginal good girl many fantasized claiming for themselves--having that moment on full display via viral video made her damaged goods. How that particular sex tape came about alongside how Jack ended up being married to someone he doesn't remember at all are what I consider the major selling points of the book. The romance and sex were a given--after all, this is a second chance love story--as was the quality of writing--Katee Robert is an author whose work I've read several times before--but those additional elements and how they were employed in this book definitely allowed it to stand apart from those that use the same trope and use the celebrity angle as well. Robert's consistent writing paired with two main characters I liked and two supporting characters that made me want to read book two ASAP make Ties That Bind a four-star winner. ♥