Review: Complications on Ice by S.R. Grey (Boys of Winter #3) 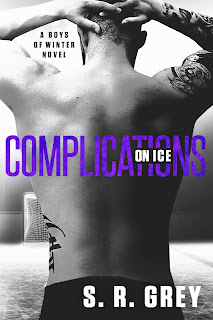 Complications on Ice is the third Boys of Winter novel from author S.R. Grey and while we already met hockey player Benjamin Perry in the previous book in the series, it's clear from what we learn here that there was way more to the guy than his easygoing charm. At twenty-nine, the guy's a force to be reckoned with on and off the ice. He's a former substance abuser but he's gotten a firm hold on his addictions and is moving on one day at a time. His need to hook-up, however...well, it's not exactly hazardous to his health and it's a mutually beneficial thing, so why stop? He has yet to find a reason--a woman--that'll give him reason to quit with his casual and uncomplicated. Then his coach's daughter shows up and twenty-one-year-old Eliza Townsend is every bit as complicated as he's told she is. Maybe messing around with her is the best way to get back at his coach for getting on his case all the time, making the risk worth it. Soon though, Benny begins to think he wants something more with Eliza. But his girl is keeping secrets from him, and a new teammate has history with her. Could "complicated" become "messed up"?

First things first: I adored Benny. Yes, his manwhore ways were not worth applauding, but the guy had worked long and hard to get to a point in his life where he actually felt good about himself and the future. He also never pretended to be someone he wasn't. On the other hand, Eliza was...immature, at best. I'm sorry but I wasn't a fan. She was a single mother who spent more time mooning over her crush on Benny--a crush that had her plotting to get together with him even as her parents were helping her move in order to start over after the fiasco she went through with the father of her child...a guy who was a hockey player! Ugh. I get that she agreed to keep the guy's identity a secret, but sheesh, there's keeping secrets and downright being deceptive. The girl was looking for trouble and almost always found it anyway. So yeah, there was a part of me that wished Benny had someone else to turn his attention towards, but oh well. I liked the redemptive aspect with regards to his substance abuse and I enjoyed the story as a whole even if Eliza never managed to win me over. I'm giving Complications on Ice four stars. ♥

Read my reviews for the Boys of Winter series:

Destiny on Ice (book one) - five stars - My Review